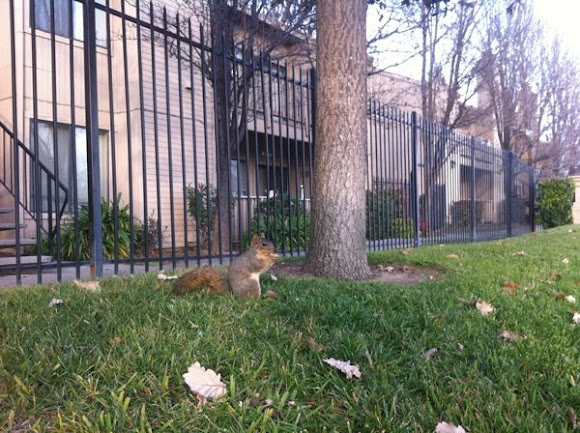 Fox squirrels were introduced to the Los Angeles area in about 1904. Civil war and Spanish American war veterans residing at the Sawtelle Veteran’s Home on Sepulveda and Wilshire Boulevards brought fox squirrels to this site from their homes in the areas surrounding the Mississippi Valley (possibly Tennessee). Other introductions of fox squirrels to the Los Angeles area may have taken place during more recent times but detailed records are not available. By 1947 the fox squirrel was considered a pest species by local walnut growers and by the Agricultural Commission. Between 1904 and 1947 the fox squirrel extended its geographic range eastward from Sepulveda and Wilshire Boulevards through the Santa Monica Mountains, northward into and across the San Fernando Valley, and over the Santa Susana Pass into the walnut groves of the Simi Valley. Range expansion continues to take place as fox squirrels are now found as far south as the Palos Verdes peninsula and Long Beach, and as far east as the cities of San Dimas, West Covina, Hacienda Heights, and Brea. The fox squirrel is named for its gray and red colored fur that resembles the pelt of a gray fox. It is also called the mangrove fox squirrel, Sherman’s fox squirrel, or the stump-eared squirrel. The fox squirrel has ten different subspecies. They can be found from the Dakotas, Nebraska, Kansas, Oklahoma, and Texas on their western boundary to the Atlantic Ocean on their eastern boundary with the exception of the New England area. Fox squirrels have been introduced into California, Oregon, Washington, Idaho, and Montana. They show several different physical characteristics that change according to their natural geographical range and habitat. The fox squirrel is the largest (2 – 3 lb. weight, 18 – 29 in. length) tree squirrel in North America and has short, rounded ears. It has a stubby neck as compared to the gray squirrel. A fox squirrel’s tail is long, very bushy, and has yellow tips on its tail hairs. The tail can be used for a variety of reasons; it can be wrapped around the squirrel for warmth, used as an aid for balance, or spread and used as a parachute. The tail is also used to communicate with other squirrels; playful or when exhibiting quick, jerky movements nervousness or excitement.

Fox squirrels prefer over mature forests near a water source with trees that have their leaves touching and very little or no undergrowth. Faster and more maneuverable on the ground than their relative, the gray squirrel, they will feed further into an open field away from a tree. Though it’s classed as a tree squirrel, a fox squirrel seeks to escape harm by out running the danger not climbing. Because of their diet, fox squirrels prefer hardwood or pine forests surrounding an open pasture, garden or grain field. Pecans, corn and soybean from agricultural fields are especially favorite food items.

Some squirrels are born with unusual colors or in the case of albinos, no color. An animal may be born darker or lighter than normal. Some can be completely white or black. The following towns take great civic pride in their white squirrel colonies; Olney, IL; Marionville, MO; Kenton, TN; Brevard, NC and Exeter, ON. These towns take pride in their black squirrels; Marysville, KS and Council Bluffs, IA. There are other towns and cities with both black and white squirrel colonies but they’re not as actively promoted.