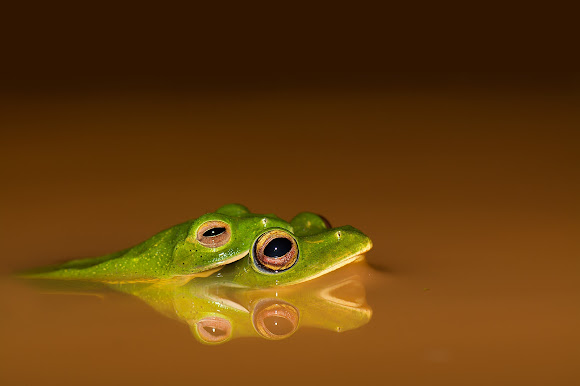 Endemic to the Western Ghats of India, Malabar Gliding Frogs have brilliant webbing between their toes which enable them to leap and cover distances. Saw this pair with the male grabbing the female behind her armpits in an embrace known as axillary amplexus. During the amplexus males hold onto a selected place for building a foam nest and beat their legs to form foam in which the eggs are laid and then covered with seminal fluid. The foam nest is usually built above a waterbody so that as soon as the eggs hatch and turn into tadpoles, they can drop into the water.

Rainforest and Evergreen forest of Agumbe which is a part of the Western Ghats. A whopping 87% of all Western Ghat frogs are endemic and found nowhere else in the world. It is also recognized as one of the world’s eight hottest hotspots' of biological diversity, inscribed in the UNESCO World Natural Heritage sites list in July 2012

The males hold on to the female for as long as they can, sometimes continue to do so even during the day when they roost. However, the competition is tough for the males to mate and there are times when a group of males are seen fighting and foaming for a single female.

Fantastic shot Vipul,beautiful composition and great info,congrats on the well deserved SOTW and thanks for sharing

Congratulations Vipul, your Malabar Gliding Frogs have been voted Spotting of the Week. The beautiful composition of your shot together with the quality of information provided about an endemic species won you the vote.

"Beautifully composed image! These Malabar Gliding Frogs (Rhacophorus malabaricus) in amplexus have been voted Spotting of the Week. Malabar Gliding Frogs have webbing between their toes which they can stretch to extend their leap. This species is endemic to the Western Ghats of India, a UNESCO World Heritage Site and one of the eight "hottest hot-spots" of biological diversity in the world. The amphibians of the Western Ghats are diverse and unique, with as much as 87% of frog species endemic including the endangered Purple Frog we featured a few days ago. Make sure to check the spotting and discover a trove of information about the reproduction of these frogs".