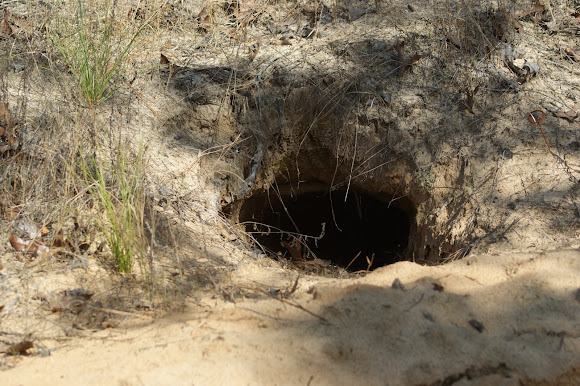 The gopher tortoise (Gopherus polyphemus) is a species of the Gopherus genus native to the southeastern United States. The gopher tortoise is seen as a keystone species because it digs burrows that provide shelter for 360 other animal species. They are threatened by predation and habitat destruction. Gopher tortoises, like other tortoises of the genus Gopherus, are known for their digging ability. Gopher tortoises spend most of their time in long burrows, up to 14.5 metres (48 ft) in length and 3 metres (9.8 ft) deep. In these burrows, the tortoises are protected from summer heat, winter cold, fire, and predators.

This burrow was observed at the Aiken Gopher Tortoise Heritage Preserve near Windsor (Aiken County), SC. The burrows are especially common in longleaf pine savannas, where the tortoises are the primary grazers, playing an essential role in their ecosystem.

I did not see the tortoise, just the burrow. The burrow has a metal tag with a number that identifies this location as a part of a study at the heritage preserve. In July 2011, United States Fish & Wildlife Service (USFWS) determined that listing the eastern population of the tortoise as Threatened under the Endangered Species Act is warranted, however, it is precluded from doing so at this time due to higher priority actions and a lack of sufficient funds to commence proposed rule development. In the interim period of time the USFWS will place the eastern population of the tortoise on its candidate species list until sufficient funding is available to initiate a proposed listing rule.