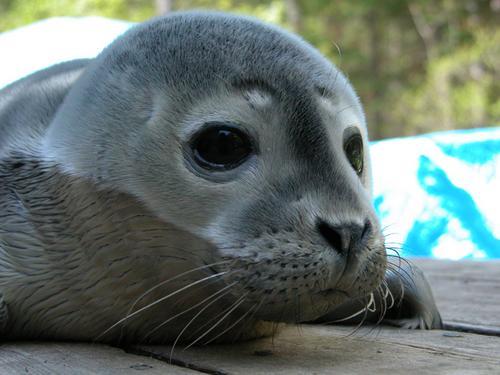 Harbor seals on the coast of Maine give birth to their pups between the last week in April (very early pup) and second week in June (very late pup). Pups can swim immediately after they are born. Most mothers nurse their pups for a maximum of 28 days and then the pup is on its own. If you should find a pup on a beach during the time they should be with their mothers, leave it (if you can, watch from a distance and make sure it isn't stressed by dogs or people)... it is possible the mother is off fishing and will return. If after 24 hours the pup is still there by itself, call a local marine mammal rescue hotline or marine patrol. Pups that aren't doing well after they are weaned can pack a wicked bite (truly since it often has nasty bacteria). It is even more important that an experienced rescue group be called.

Coastal waters near good haul out ledges until they are weaned then pups are thought to strike out on their own or in small groups to find food in deeper waters. They seek scrimp and other small easily caught prey to tide them over as they practice their hunting skills.

This is a pup I helped rescue many years ago... I have been trained as a rescue volunteer and was asked to pick up this pup from an area near where I observe. We had to keep it in our bath tub until someone from Allied Whale (our local Marine Mammal rescue organization) came to rehydrate it and take it to the rehab center in Portland. It is illegal to pick up a pup (and very stressful for them) without a license. It was a great experience to be able to help this little guy out... he is a male (not so little anymore!) After a few weeks to fatten up and gain sophistication in the art of fishing in rehab, he was released with several other rehabilitated pups! Unless you have a permit (I was )

Congratulations Gale, this cute little guy has been featured in the Project Naoh blog today! http://blog.projectnoah.org/post/2919896...