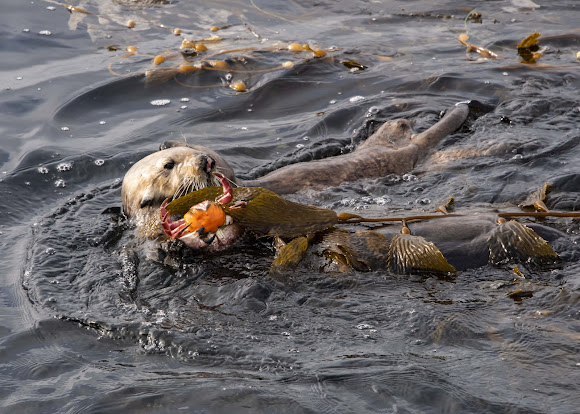 As pictured, this female is estimated at about 45 pounds in weight, and between 3 1/2 to 4 feet long. She is pictured with her smaller pup. She has a thick fur coat tan to brown in color. Sea Otter fur is denser than almost any animal, with an estimated 1 million hairs per square inch.

This pair was spotted in Monterey Bay, California. The ocean in this area is thick with kelp, as noted in the photos. Sea otters are critical in maintaining an ecological balance in kelp forests, as they eat sea urchins that if unchecked would destroy the kelp.

This posting has a personal element to which we all can identify. In the first photo, mom was diving and had just snagged the "catch of the day"...a crab. The second and third photos show mom sharing dinner with her pup. The last photo is my favorite…the pup is full, happy and asleep on mom’s tummy. Life is good! There is some cautionary good news on California Sea Otters. US Fish and Wildlife has this species currently listed as ENDANGERED. The 2017 census conducted in April found a population of 3,186 otters, which was down from the previous year’s count by 86. However, this is the second consecutive year in which the population exceeded 3,090, which is the minimum population required to maintain and increase otter numbers. The Sea Otter Recovery Plan holds that 3 years of population count above the minimum 3,090 would allow USF&W to consider delisting this population as Endangered. Cross your fingers…I would like to see many more moms and pups enjoying life!

Thanks Neil and Michael

Thanks for the updagte, nice to have some good news in terms of a species sustaining higher numbers under a program when so many are threatened round the world. :)

Cheers for the update, Jim.

Since I made this posting, I have periodically checked the US Fish and Wildlife updates on the latest third year otter survey. On 09/25 there was a release on their 2018 findings...

"Southern sea otter numbers have declined off the coast of California since peaking in 2016, but the average population count remains above 3,090 for the third consecutive year. According to the U.S. Fish and Wildlife Service’s Southern Sea Otter Recovery Plan, the population average count would have to exceed 3,090 for three consecutive years for southern sea otters to be considered for delisting under the Endangered Species Act."

The population average count this year has exceeded the 3090 threshold. However, this year's average count of 3,128 was 58 otters lower than the 2017 average survey. The past 3 years have exceeded 3090 minimum needed to sustain their population. The article does not state that sea otters will be removed from the "Threatened" designation. It does state that research is continuing on their long-term survival prospects. I think that with the last few year population declines, it is a good idea to continue the otter watch, and make sure they can weather future threats to their survival.

Thanks Sarah and Robert! These two were perfectly comfortable in an area with tourists, a marina, a pier, a Coast Guard facility, kayaks, and boats. That makes it easier to document their activities...but close proximity to humans is not usually a good thing.

THESE are WONDERFUL, Jim!!
Congrats on your SOTW!!

Great series Jim. Congratulations on your SOTW. Wonderful news if they can get the critical mass they need to increase their numbers.

Growing up in California, when so many species were seriously endangered, I have never seen a sea otter at close range, except in Aquariums/zoos. Brilliant series

Thanks to all for your comments.

Congratulations, Jim. So very happy to heard this beautiful creatures are close to coming off the ENDANGERED LIST...

Congratulations Jim! Very beautiful pictures, they are not going to eat the baby duck are they?

Congratulations Jim, it is a wonderful spotting, indeed.

Antonio, thanks for the kind comments.

Daniele...I thoroughly enjoyed posting this spotting, as there was a good background story and hopefully a brighter future for an endangered species. Thanks to the PN Rangers for your recognition!

Great spotting Jim,perfect series and great comments,very good working,congrats on the well deserved SOTW and thanks for sharing

Congratulations Jim, your California Sea Otter series has bee voted Spotting of the Week! There was some serious competition this week: well done to all who were shortlisted. Rangers loved this series for its completeness and personalized notes including a combination of observation and conservation information.