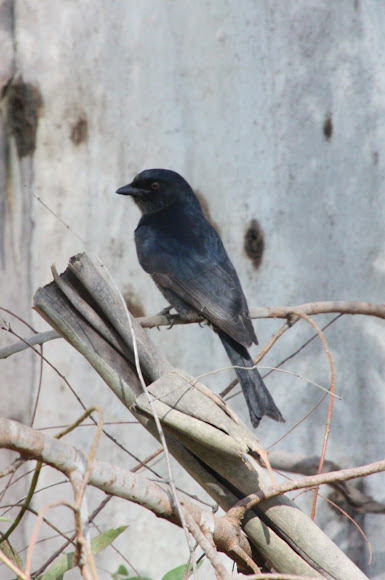 The Fork-tailed Drongo, Dicrurus adsimilis, also called the Common Drongo, African Drongo or Savanna Drongo, is a drongo, a type of small passerine bird of the Old World tropics. They are members of the family Dicruridae. These insect-eating birds are usually found in open forests or bush. Two to four eggs are laid in a cup nest in a fork high in a tree. The male is mainly glossy black, although the wings are duller. It is large-headed and has the forked tail which gives the species its name. The female is similar but less glossy. The bill is black and heavy, and the eye is red. The Fork-tailed Drongo is 25 cm long. It has short legs and sits very upright whilst perched prominently, like a shrike.

The Fork-tailed Drongo is a common and widespread resident breeder in Africa south of the Sahara.