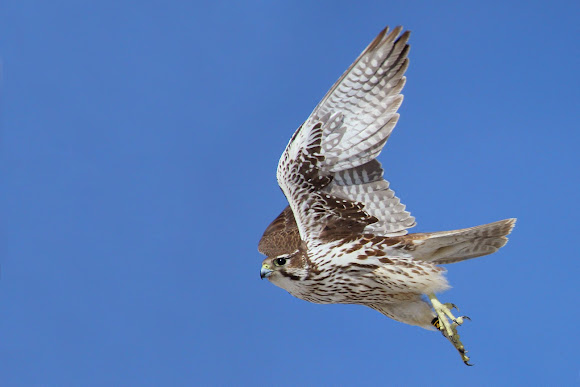 Plumage is warm gray-brown (sometimes called "sandy") above and pale with more or less dark mottling below. The darkest part of the upper side is the primary wing feathers; the lightest is the rump and tail, particularly the outer tail feathers. The head has a "moustache" mark like a Peregrine Falcon's but narrower, and a white line over the eye. A conspicuous character is that the axillars ("wingpits") and underwing coverts are black, except along the leading edge of the wing. This creates an effect of "struts" from the body along each wing. Juveniles resemble adults except that they have dark streaks on the breast and belly and darker, less grayish upper-parts.

This falcon has been banded by the Denver International Airport. Raptors that are trapped on DIA land are banded and relocated. If they return and are trapped 3 times they are euthanized. While this may be upsetting, a raptor of this size can bring down an aircraft. This is done for the safety of travelers.

Thanks for looking everyone!

Thank you Dixie! This falcon now knows the sound of my vehicle and books it whenever I get near his favorite hunting spot!

Thank you for the kind words everyone!

Great capture Emily,congrats and thanks for sharing

My favorite picture of the week. Prairie falcon shots like this are hard to find.

Thank you so much venusflytrap2000!