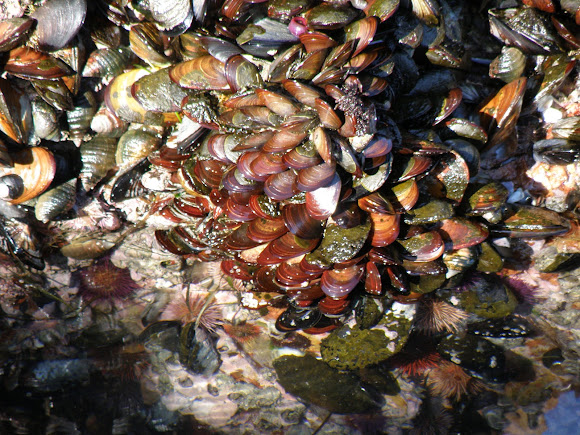 Mussel is the common name used for members of several families of clams. These groups have in common a shell whose outline is elongated and asymmetrical compared with other edible clams, which are often more or less rounded or oval. The word "mussel" is most frequently used to mean the edible bivalves of the marine family Mytilidae. most of which live on exposed shores in the intertidal zone, attached by means of their strong byssal threads ("beard") to a firm substrate

Marine mussels are abundant in the low and mid intertidal zone in temperate seas globally. Other species of marine mussel live in tropical intertidal areas, but not in the same huge numbers as in temperate zones. Certain species of marine mussels prefer salt marshes or quiet bays, while others thrive in pounding surf, completely covering wave-washed rocks. Some species have colonized abyssal depths near hydrothermal vents. The South African white mussel exceptionally doesn't bind itself to rocks but burrows into sandy beaches extending two tubes above the sand surface for ingestion of food and water and exhausting wastes.

I agree, mussels, along with a variety of other critters.