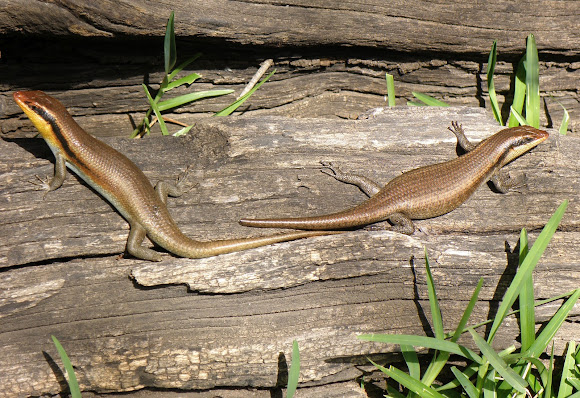 The African Striped Skink (Trachylepsis striata), commonly called the Striped Skink, is a lizard in the skink family (Scincidae). This skink is brown or bronze coloured with two yellowish stripes that run lengthwise on either side of the spine. Both sexes grow to a length of 25 cm.[1] Their tails are often missing due to predators.

I COULD NOT GET INFO ON THIS FROM WIKIPEDIA. THE STRIATED STRIPS ARE NOT THERE ON THIS SO COULD IT BE NON STRIATED Trachylepis?

The second photo is a nice one; the first one didn't upload properly so could you please upload it again?

a skink of some kind