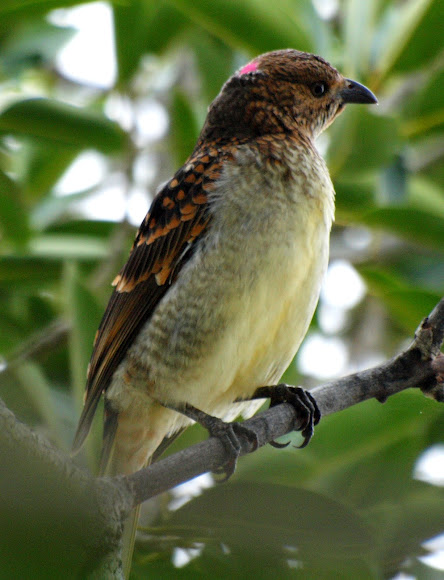 The species is most common in dry open sclerophyll woodlands dominated by acacias (such as Brigalow, Mulga, Gidgee or Ironwood), eucalypts (including Bimble Box, River Red Gum or Coolibah) or mixed assemblages of both, especially where there is a dense understorey of small trees or shrubs, including dense, fruit-bearing shrubs, such as Myoporum. They also often occur in dry woodlands vegetated with casuarinas (e.g. Buloke, Belah), Wilga and cypress-pines. Spotted Bowerbirds sometimes also inhabit riverine associations, especially where they are adjacent to dry woodlands, particularly in Victoria. They commonly visit rural gardens and homesteads.

Although usually solitary during the display and breeding seasons, groups of up to 16 immature Spotted Bowerbirds may visit a bower, and when not attending bowers or nests, they can form flocks of up to 30 birds, and occasionally more than 50. Well camouflaged, individual Bowerbirds are sometimes quite difficult to see among the vegetation. They are generally active, and though often shy, they can be quite tame near human habitation. Their presence may be indicated by their distinctive avenue-bower, which is typically built under a shrub and is often decorated with whitish, green, red or shiny objects, including bones, snail shells and berries, often including metallic and glass objects. The species forages singly or in small groups, in trees and shrubs, mainly taking fruit but sometimes also seeds and insects, and they occasionally forage on the ground, bounding energetically. When foraging, they sometimes associate with other birds, such as honeyeaters. Their flight is swift, direct and undulating, with powerful wing-beats of their upswept wing-tips with well-defined ‘fingers’; the wings close briefly at the apex of each undulation and open with each dip. They remain close to the canopy when flying above the vegetation. Males often call and display on the ground as well as in branches.