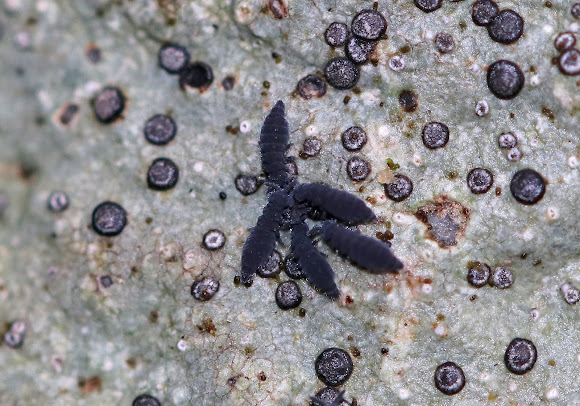 Snow fleas are not a type of flea. Neither are they insects. Rather, they are arthropods that belong to the class Entognatha. During most of the year they live in the soil and leaf litter where they consume fungi and decaying vegetation. They are actually crucial decomposers! On warm winter days, they often appear on the surface of the snow and since they are tiny (~1mm) like fleas, they are referred to as "snow fleas". Their migrations from the soil/leaf litter to the snow may be triggered by overcrowding or lack of food. They do not have wings, but instead have tail-like projections called furcula, which are held like a spring on the bottom of their abdomens. When a snow flea wants to move, the furcula springs down and catapults the snow flea as far as 100 times its body length! Furthermore, snow fleas in the genus Hypogastrura have three anal sacs, which they evert just before jumping. These sacs are thought to serve as sticky air bags, which prevent the snow fleas from bouncing around randomly when it lands. Pretty amazing biology!

I spotted thousands of these springtails in the woods - they were all over rocks, rotting wood, trees, and leaf litter. Everything was very wet from snow melt and recent rain. Snow fleas are one of the most numerous land animals, with several hundred thousand possibly living in one cubic yard, but it was still a surprise to see as many as I did!

I'm wondering if food sources for these creatures are scarce right now, or if they normally engage in cannibalism because I spotted several groups clustered together eating each other (photos 1 and 3), thus exhibiting a type of cannibalism called Intratrophic Predation.

Thank you for the nomination!

You're welcome and thanks Mark! It was amazing to see them covering literally every surface. I initially spotted them because I was looking for a rock to rest on, but couldn't find one lest I squish these little buggers.