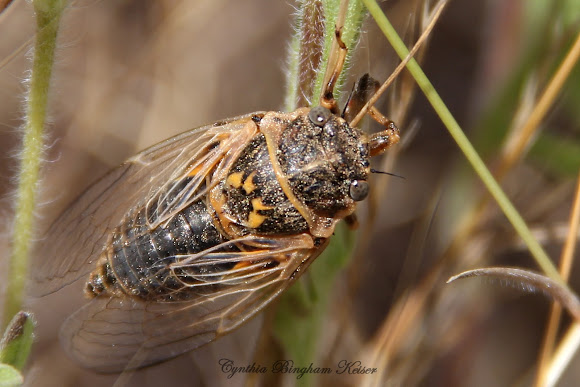 Gray and yellow insect with translucent wings. In the video, you can hear the loud sound it makes in the spring and summer time and see the abdomen move. (There's also a bird call in the background).

"Male cicadas have loud noisemakers called "tymbals" on the sides of the abdominal base. Their "singing" is not the stridulation (where one structure is rubbed against another) of many other familiar sound-producing insects like crickets: the tymbals are regions of the exoskeleton that are modified to form a complex membrane with thin, membranous portions and thickened "ribs". Contracting the internal tymbal muscles produces a clicking sound as the tymbals buckle inwards. As these muscles relax, the tymbals return to their original position producing another click. The interior of the male abdomen is substantially hollow to amplify the resonance of the sound. A cicada rapidly vibrates these membranes, and enlarged chambers derived from the tracheae make its body serve as a resonance chamber, greatly amplifying the sound. The cicada modulates the sound by positioning its abdomen toward or away from the substrate. Additionally, each species has its own distinctive "song". Some cicadas produce sounds up to 120 dB (SPL), among the loudest of all insect-produced sounds. This is especially notable as their song is technically loud enough to cause permanent hearing loss in humans, should the cicada sing just outside the listener's ear. Conversely, some small species have songs so high in pitch that the noise is inaudible to humans." - Wikipedia

Thanks Gerardo! It's my first Cicada :)