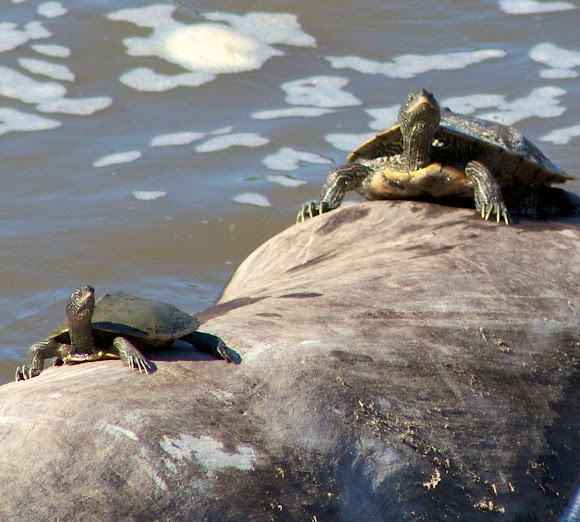 A male false map turtle is basking in the foreground of the 1st photo, and the much larger female is basking at the end of the log near the water. This species exhibits sexual dimorphism - adult females are twice the size of adult males. The false map turtle is a fairly large freshwater turtle inhabiting the Mississippi and Missouri river systems. Male upper shell length up to 15 cm (5.9 inches), females up to 27 cm (10.6 inches). The thick yellow line behind each eye forms a backwards "L" shape. It frequently basks on logs and will quickly drop into the water at the slightest sign of danger.

Spotted these river turtles basking on partially submerged logs near the banks of the Missouri River, near Eagle Bluffs Conservation Area. False map turtles can also be found in the Mississippi River, and river sloughs, oxbow lakes and constructed reservoirs.

[Info from Freshwater Turtles CITES petition, Aug. 15, 2011. The 2nd reference link on the right links to the PDF version of the petition with references] The false map turtle is declining in Mississippi, possibly as a result of several factors, including water pollution, river channelization, reduction of suitable nesting sites, siltation, and unlawful shooting (Johnson 1987). Vandewalle and Christiansen (1996) noted that river modifications in Iowa, including channel straightening, dredging, impoundments, and other changes to the natural environment had negative effects on false map turtle populations. The pet trade also adversely affected map turtle populations. The false map turtle was one of the most heavily traded species (excluding farm raised species) in the Hong Kong pet trade between May 1998 and May 1999 (Lau et al. 2000). There has been a commercial market for this species for a long time (Clark and Southall 1920). Commercial fishermen told Anderson (1965) that the false map turtle had been abundant in the Mississippi and Missouri rivers 25 years prior but had become uncommon. Commercial fishing may contribute significantly to mortality in this species because turtles become entangled as bycatch (Ernst and Lovich 2009). In addition, large female false map turtles (Graptemys pseudogeographica) grow larger than other map turtle species and are consumed as food.

Added new 5th photo that shows these 2 map turtles when I initially spotted them from a walking trail.

Thanks Carol! I'm going to go back to that spot later this week to photograph this species again. Yesterday, I bought a cool monopod that is going to help with camera shake and hopefully improve the focus on my pictures.

I am definitely your follower now! For sure! Love all your turtles!

What a fantastic find! WOW! First on Project Noah! That is just great!

Thank you Ashish for your compliment and kind words.

PN is becomes precious and all-rounder Encyclopedia of Real Life... Thanks Neil to share them here on Project Noah...Wonderful learning lesson.

Thank you for the compliment williefromwi! It was a lot of fun!

Congrats, your determination paid off with some nice captures. Way to go to have the first spotting of this up on project noah too.

Thanks Maria! So many times I've got to the point where I'm ready to snap the first photo of a basking turtle only to realize it just dived into the water. Because I hadn't spotted this species before, I was EXTRA careful not to make any noise at all! :)

Congratulations - your stealth paid off!