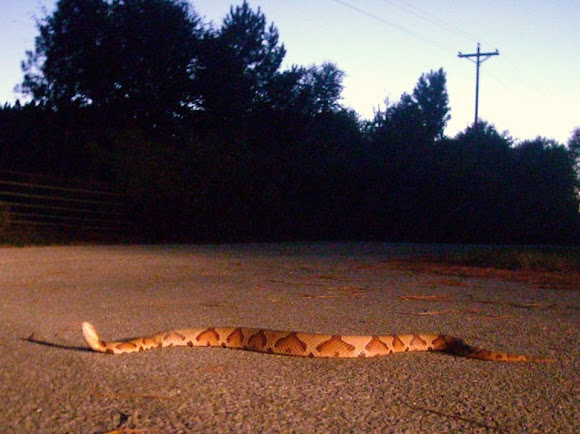 Tan to russet to pinkish background color cross-banded with hourglass shaped darker bands. Elliptical pupil. The snake is a stout-bodied medium-sized snake with a rather chunky head. Venomous. Pit viper.

Snake is common almost everywhere in South Carolina, from the Low Country to the mountains. In this Piedmont habitat, the snake is found in suburbs and cities, fields, woodlands and on farmland. It is one of our more common species

The time of this spotting was dusk and I encountered the snake crossing a road. It was rather chilly--only 68 degrees F. This individual was an average sized adult snake of about 32 inches and in good body condition. I attempted to help the snake out of the road but found myself without a snake hook or anything I could use to this end. The snake was rather defensive and did not want to be assisted out of the road. In fact, it became quite agitated, though I had expected the snake to be sluggish due to the temperature. In considering this, I feel that the snake was being kept warm by its contact with the pavement, which retains its temperature long after the ambient temperature of the air has dropped. I finally found an old piece of carpet on the side of the road and used it to "herd" the snake onto the shoulder. It is worthwhile to note that the months of September and October in South Carolina are very active "crawling" months. Copperhead sightings for me peak during this time of year, as the snakes are quite actively moving to feed and then return to denning areas for the winter. Another point is the posture of this snake. Snake identification from a moving vehicle is an acquired skill. The pit vipers tend to crawl and present with this chin up posture that makes identifying them from a moving car easier than you might think. Not an outstanding photo, as I am not a photographer, but still one of my favorite encounters with one of my favorite species.

Thanks for the info :) I will have to keep an eye out for copperheads here in GA when September rolls around.