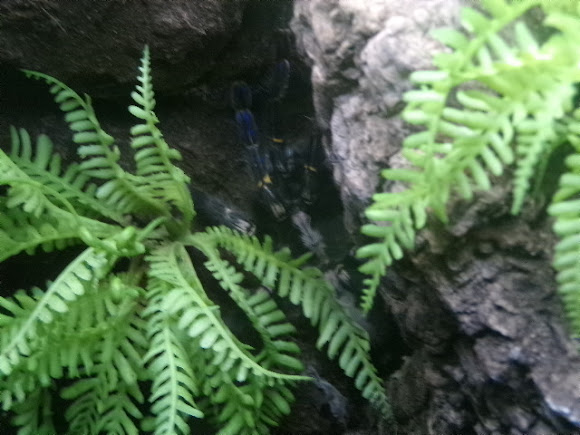 A gooty sapphire at the Sedgwick Zoo. This is by far my favorite Old World tarantula. The striking blue, white, and gold on their bodies is amazing. This female is exhibiting her species natural behavior, as in the wild they live in holes in trees and spin asymmetrical funnel webs. Gooty sapphires are named because their type specimen was discovered in the Indian town of Gooty, a little south of their natural habitat. These spiders are critically endangered as they are only found in one small forest reserve, and even that is being ravaged, because its Asia, of course it is. Despite living in the worst part of world to be wildlife, the gooty sapphire is beloved in the pet and exotic world and is captive bred by many keepers. Imports from the wild do still hurt this species chance of survival. This species is skittish and not prone to bite, it is photosensitive to light and lacks urticating hairs. When provoked, what it does have are large fangs and medically significant venom. There have been no reported deaths from a gooty sapphire bite, and they're from India, so you know their doctors don't have an anti-venom prepared. An entomologist friend of mine keeps this species and is trying to breed them, when he was bitten he was on bedrest for about a week before recovering.

This species is native to a very small forest reserve in India.