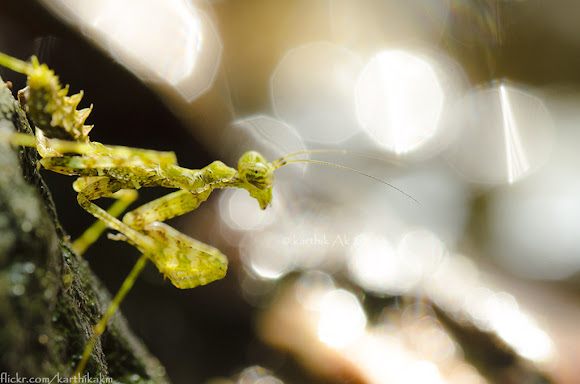 So far every visit to western ghats has been fruitful. I have one or the other special moments. It was my second visit to coorg and my first with wild buddy Vipin! We didn't have a concrete plan, however Vipin being aware of the places of his hometown helped us decide which place to visit without much confusion. we decided to explore a place about 10 km away from his home. It was forest area where people have seen elephants. It has a stream, which was small as it was a month after the last monsoon rain. The forest floor was dry but still there were leeches, at one particular place it was in huge numbers usually seen during monsoons! We trekked for about half hr and reached the stream. We were welcomed by the foot flagging frog(Micrixalus sp). he leaped and disappeared. While searching for him, Vipin spotted this beautiful dragon like mantis- resembling a moss. He was so beautiful, with the abdomen having pointed projections like that of a dragon. He was on a rock- we were wondering why did he came out of his hide out base and why was he on a dark stone. We started observing him and took some photos. We spent close to an hour observing him. There was no activity apart from moving his body up n down. After a while we went ahead in search of other life!

Not sure of this is the first sighting of moss mantis from India! http://www.insects.org/entophiles/mant_0...

Thanks ForestDragon.
spotting added to the mission!

Very neat find! I am not sure of the species, either, but I would love to see this added to the Marvelous Mantids of the World mission: http://www.projectnoah.org/missions/1573...