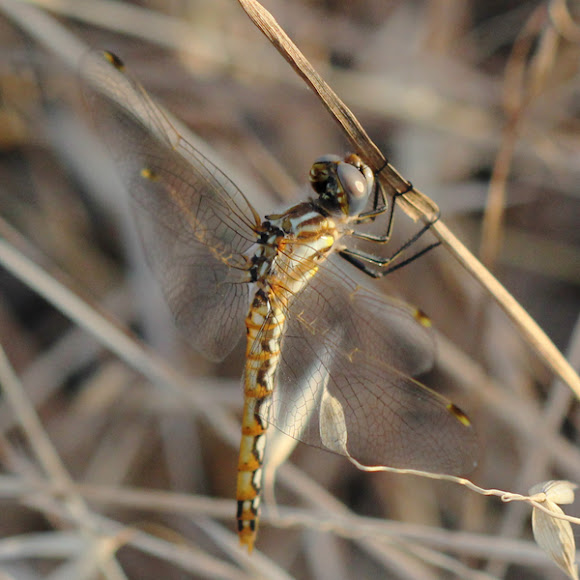 Shown is a female. The thorax is marked with yellow dots to each side (just above the legs and running into the two white stripes). Females are mottled with black, gray and yellow. Males display as red, pink and brown on the abdomen. "The Variegated Meadowhawk is a small to medium-sized dragonfly with a slender abdomen, often reaching a length of 1 5/8 to 1 11/12 inches." Source: Wikipedia

"This species is found from British Columbia and Ontario areas south through much of the United States to southern California and Florida. It migrates as far south as Honduras, and as far west as eastern Asia. Variegated Meadowhawks live near ponds, lakes, and swamps." This female was spotted at the Madrona Salt Marsh.

The coloration of the female form of this dragonfly helps it to camouflage itself in dry grass.

Thanks! It was late in the evening at a salt marsh. If I hadn't been with a person familiar to the area, I wouldn't have known that they were collecting in the grass there.