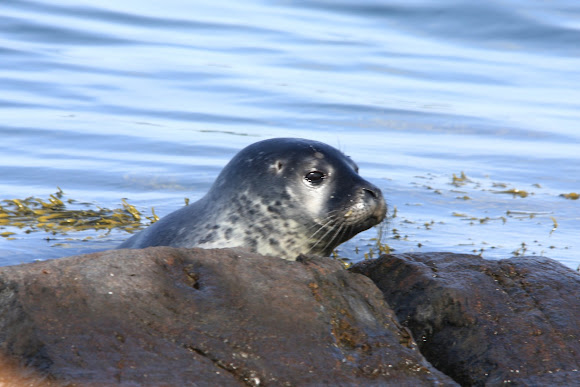 Since 1988, I have observed a group of Harbor seal that use a nearby protected bay to haul out... during May and June the population consists mainly of mothers and pups. I sit on a rock that is more than 1000 feet from the haulout rock so as not to disturb them at this delicate time. But this little one chose to clamber out right below my observation seat, there was no sign of its mother (it could be weaned though it is early or alone). It did not seem aware I was there and left as quietly and as soon as I could, in hopes its mother would come and retrieve it. ***It is pupping time until late June. If you should find a pup PLEASE leave it be, make sure that people and dogs stay away from it, if you have the chance check on it now and then FROM A DISTANCE and if it is still there after about 24 hours call your local marine mammal rescue organization or the state wildlife agency. Do not attempt to rescue it, no matter how hard it may be to leave it (it certainly was for me!) First... the best outcome is that its mother finds it and this gives them a chance to be reunited. Second... pups can bite and if they are sickly their bite can cause serious illness.