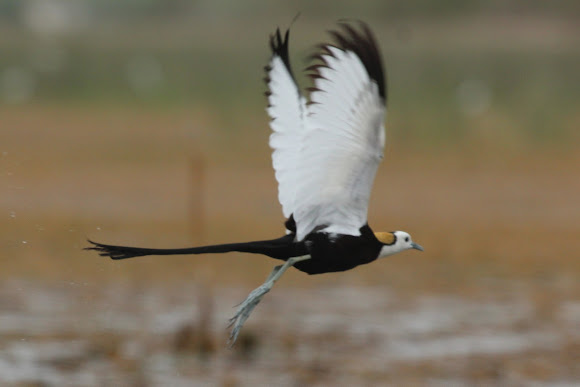 Pheasant-tailed Jacana are identifiable by their huge feet and claws which enable them to walk on floating vegetation in shallow lakes, their preferred habitat. The Pheasant-tailed Jacana is capable of swimming, although it usually walks on the vegetation. The females are more colourful than the males This is the only jacana to have a different breeding plumage. The Pheasant-tailed Jacana is a conspicuous and unmistakable bird. Breeding adults are mainly black other than white wings, head, and fore neck. The hind neck is golden. There is a striking white eyestripe. The legs and very long toes are grey. Non-breeding adults lack the long tail. The underparts are white except for a brown breast band and neck stripe. The side of the neck is golden. Young birds have brown upperparts. The underparts are white, with a weak brown breast band.

The Pheasant-tailed Jacana's main sources of food are insects and other invertebrates picked from the floating vegetation or the water's surface.

Thank you Yogesh and shameerzaman1999

Thank you Ashish, for your update. Thanks Luis, Jeannette, Dixie, Liam and Stian for your kind comments!

This is most beautiful and spectacular Marshland bird seen in India. Male bird in Breeding form of plumage...
http://orientalbirdimages.org/search.php...

Thank you Atul, Gerardo, Karen, Maria and Nuwan. I was lucky to see them in this plumage. It was on my wish list since a long time.