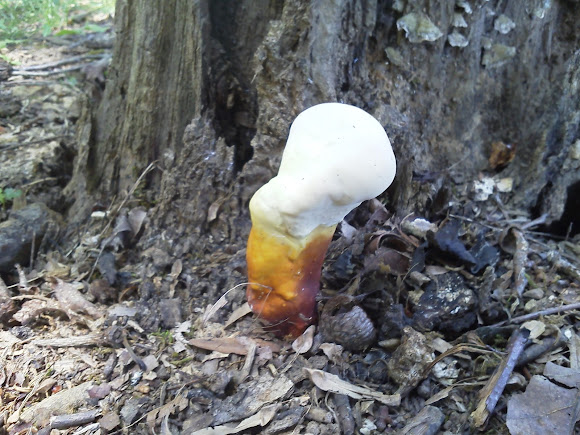 Lingzhi is a polypore mushroom that is soft (when fresh), corky, and flat, with a conspicuous red-varnished, kidney-shaped cap and, depending on specimen age, white to dull brown pores underneath. It lacks gills on its underside and releases its spores through fine pores, leading to its morphological classification as a polypore. Ganoderma lucidum generally occurs in two growth forms, one, found in North America, is sessile and rather large with only a small or no stalk, while the other is smaller and has a long, narrow stalk, and is found mainly in the tropics. However, many growth forms exist that are intermediate to the two types, or even exhibit very unusual morphologies, raising the possibility that they are separate species. Environmental conditions also play a substantial role in the different morphological characteristics lingzhi can exhibit. For example, elevated carbon dioxide levels result in stem elongation in lingzhi. Other forms show "antlers', without a cap and these may be affected by carbon dioxide levels as well.

Ganoderma lucidum, and its close relative Ganoderma tsugae, grow in the northern Eastern Hemlock forests. These two species of bracket fungus have a worldwide distribution in both tropical and temperate geographical regions, including North and South America, Africa, Europe, and Asia, growing as a parasite or saprotroph on a wide variety of trees. Similar species of Ganoderma have been found growing in the Amazon. In nature, Lingzhi grows at the base and stumps of deciduous trees, especially maple. Only two or three out of 10,000 such aged trees will have Lingzhi growth, and therefore its wild form is generally rare. Today, Lingzhi is effectively cultivated both indoors under sterile conditions and outdoors on either logs or woodchip beds.

Lingzhi may possess anti-tumor, immunomodulatory and immunotherapeutic activities, supported by studies on polysaccharides, terpenes, and other bioactive compounds isolated from fruiting bodies and mycelia of this fungus. It has also been found to inhibit platelet aggregation, and to lower blood pressure (via inhibition of angiotensin-converting enzyme), cholesterol, and blood sugar. Laboratory studies have shown anti-neoplastic effects of fungal extracts or isolated compounds against some types of cancer, including epithelial ovarian cancer. In an animal model, Ganoderma has been reported to prevent cancer metastasis, with potency comparable to Lentinan from Shiitake mushrooms. The mechanisms by which G. lucidum may affect cancer are unknown and they may target different stages of cancer development: inhibition of angiogenesis (formation of new, tumor-induced blood vessels, created to supply nutrients to the tumor) mediated by cytokines, cytoxicity, inhibiting migration of the cancer cells and metastasis, and inducing and enhancing apoptosis of tumor cells. Nevertheless, G. lucidum extracts are already used in commercial pharmaceuticals such as MC-S for suppressing cancer cell proliferation and migration. Additional studies indicate that ganoderic acid has some protective effects against liver injury by viruses and other toxic agents in mice, suggesting a potential benefit of this compound in the treatment of liver diseases in humans, and Ganoderma-derived sterols inhibit lanosterol 14α-demethylase activity in the biosynthesis of cholesterol . Ganoderma compounds inhibit 5-alpha reductase activity in the biosynthesis of dihydrotestosterone. Besides effects on mammalian physiology, Ganoderma is reported to have anti-bacterial and anti-viral activities. Ganoderma is reported to exhibit direct anti-viral with the following viruses; HSV-1, HSV-2, influenza virus, vesicular stomatitis. Ganoderma mushrooms are reported to exhibit direct anti-microbial properties with the following organisms; Aspergillus niger, Bacillus cereus, Candida albicans, and Escherichia coli. Preparation Due to its bitter taste, Lingzhi is traditionally prepared as a hot water extract. Thinly sliced or pulverized lingzhi (either fresh or dried) is added to a pot of boiling water, the water is then brought to a simmer, and the pot is covered; the lingzhi is then simmered for two hours. The resulting liquid is fairly bitter in taste, with the more active red lingzhi more bitter than the black. The process is sometimes repeated. Alternatively, it can be used as an ingredient in a formula decoction or used to make an extract (in liquid, capsule, or powder form). The more active red forms of lingzhi are far too bitter to be consumed in a soup.