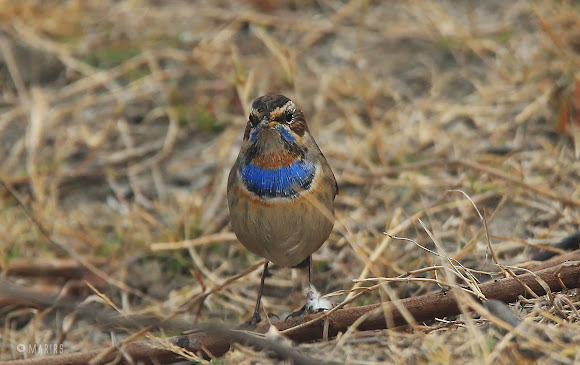 The bluethroat is a small passerine bird that was formerly classed as a member of the thrush family Turdidae, but is now more generally considered to be an Old World flycatcher, Muscicapidae. It, and similar small European species, are often called chats. It is a migratory insectivorous species breeding in wet birch wood or bushy swamp in Europe and Asia with a foothold in western Alaska. It nests in tussocks or low in dense bushes. It winters in north Africa and the Indian subcontinent. The bluethroat is similar in size to the European robin at 13–14 cm. It is plain brown above except for the distinctive black tail with red side patches. It has a strong white supercilium. The male has an iridescent blue bib edged below with successive black, white and rust coloured borders. Some races, such as L. svecica svecica (red-spotted bluethroat) of northern Eurasia, have a red spot in the centre of the blue bib.