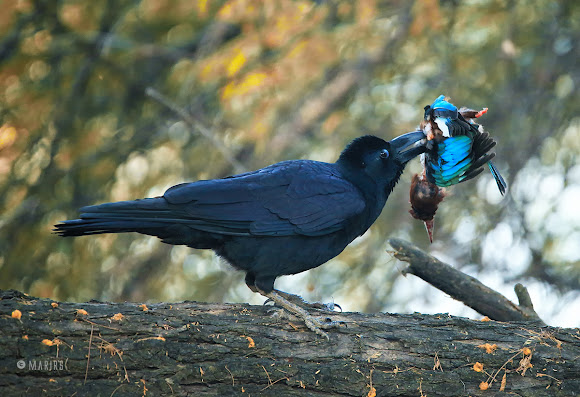 The jungle crow, is a widespread Asian species of crow. It is very adaptable and is able to survive on a wide range of food sources, making it capable of colonizing new areas, due to which it is often considered a nuisance, especially on islands. It has a large bill which is the source of its scientific name macrorhynchos (Ancient Greek for "large beak"), and it is sometimes known by the common names large-billed crow or thick-billed crow. It can also be mistaken for a raven. It has 11 subspecies, and some of these are distinctive vocally, morphologically and genetically, leading to speculations that more than one species is involved.

Strangely, this large-billed crow, attacked a white-throated kingfisher, and was feeding on it. He also tried attacking an Indian Roller, but the Indian Roller managed to escape. Is it some flashing blue, that the jungle crow is not liking?

Ava's right - ghastly but interesting. Thanks for sharing, Marirs.

What an incredible bird!

What a ghastly but interesting spotting. Amazing capture!