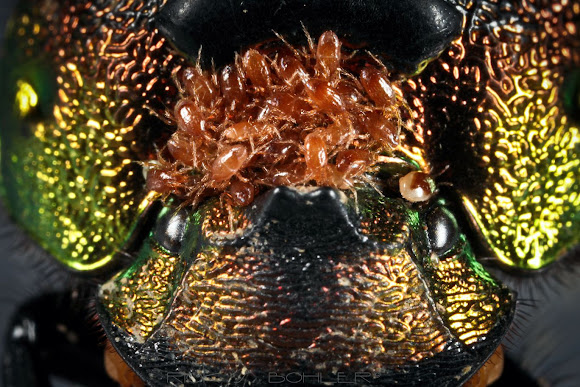 All those little mites crawling all over this rainbow scarab beetle looks pretty bad for the beetle, doesn’t it? If those were parasites, that beetle would probably be done for. Luckily for the beetle, they are not parasites.

These mites eat the eggs and larvae of carrion flies, but they don’t have any way of getting from one piece of fly-infested carrion to another, what with not having wings and with carrion being pretty widely distributed. So, they hitch a ride on large carrion beetles, which will take them where they want to go. Once there, the mites invade the corpse and start eating fly eggs. Carrying these mites is to the beetle’s advantage, too, because carrion flies are The Competition at the corpse. So, if a beetle can offload a bunch of mites to clear out the fly eggs, there will be more carrion left over for the beetle larvae. Everybody wins! Except for the flies.

Makes me twitch just looking at it. Great seriies.