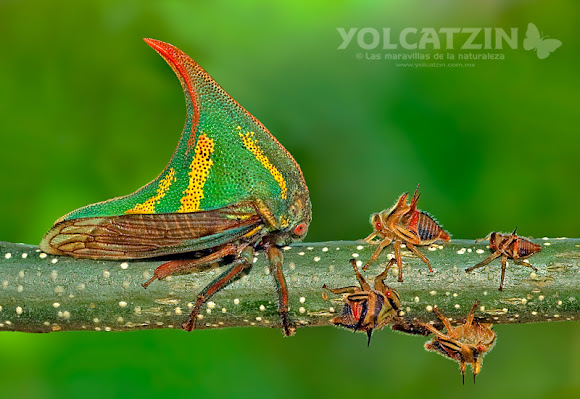 Umbonia crassicornis is a common and widespread member of the family Membracidae, and one of numerous species colloquially referred to as thorn bugs. The body length of the adult is approximately 10mm. This is a variable species as to size, color and structure, particularly the pronotal horn of males (which is more angled posteriorly than the females' and often somewhat expanded apically). This tall, essentially perpendicular thorn-like pronotum discourages birds and other predators from eating it, if only by mistakenly confusing it with a thorn. An adult thornbug is a colorful sight: lime green with orange lines radiating from a red-tipped spine (newly emerged adults are bright yellow). From a distance, though, these treehoppers blend into the background. The female is especially difficult to spot, often hidden beneath a spray of delicate, light green leaves or visible as little more than a spiny interruption on the gradually tapering stem.

Prefers secondary, altered and riparian forests. In primary forests is only found in open areas. Areas that inhabits this species are generally dry, which probably contributes to the seasonality and abundance of the host, and therefore the tendency of aggregation and high density. It feeds on the sap of the growing parts or young at several host plants. Use a variety of hosts of the family Fabaceae, has been reported in Inga, Calliandra grandiflora, Calliandra spp., C. haematocephala, Parkinsonia aculeata, Enterolobium cyclocarpus, Lysiloma bahamensis, Tamarindus indica, Desmanthus virgatus, Sesbania emerus, Caesalpinia sp. and various species of Acacia, Mimosa y Albizzia. This species can be found him in Mexico, Estados Unidos (Florida), Belice, Guatemala, Honduras, Panamá, Isla Taboga, Colombia, Venezuela and Brasil.

In the picture we see an adult female taking care of their young nymphs. The shapes and colors of most of the Treehoppers is amazing.

Thanks Cindy I have added.
Thanks James!

Wonderful! Please consider adding this to the global mission, The Hoppers: http://www.projectnoah.org/missions/8096...