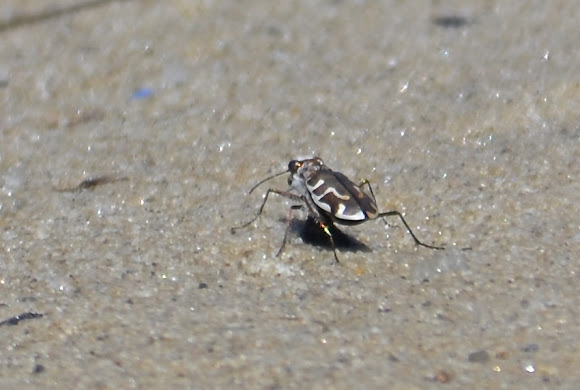 The northeastern beach tiger beetle has been described as a handsome, sand-colored insect. The white to light tan wing covers on the insect's back are often marked with fine dark lines. The head and thorax (chest area) are bronze-green. Overall length varies from 1/2 to 3/5 inch (13-15.5 mm). True to their name, they grasp prey with long, sickle-like mandibles (mouthparts) in an aggressive, "tiger-like" manner. Larvae are also predatory and similarly equipped.

Early records indicate that the northeastern beach tiger beetle occurred in "great swarms in July" along coastal beaches from Martha's Vineyard south to New Jersey and on both sides of Chesapeake Bay in Virginia and Maryland. It was very common on Rhode Island and Long Island beaches. Today, it is extirpated from the northern Atlantic Coast with the exception of a tiny population of fewer than 40 adults on Martha's Vineyard, Massachusetts. This is the only known population north of Maryland. Over 50 sites occur in the Chesapeake Bay area; half of these have over 100 adults with 16 having over 500. Ideal habitat for the adult beetles and their larvae are wide, undisturbed, dynamic, fine sand beaches. The most important consideration, though, is limited use and disturbance by vehicles and humans.

East End aka Lorelei 7 years ago

@Michael 69 and hudwit - I am so sorry. I should have changed this long ago but I haven't been on this site in many months due to family health issues (which are improving)

I had sent it to NY DEC and the Chief Zoologist of the New York Natural Heritage Program corrected my ID and was even kind enough to recommend a guide to help me ID in the future.

Many thanks to you for the correction.

Spotted by
East End aka Lorelei