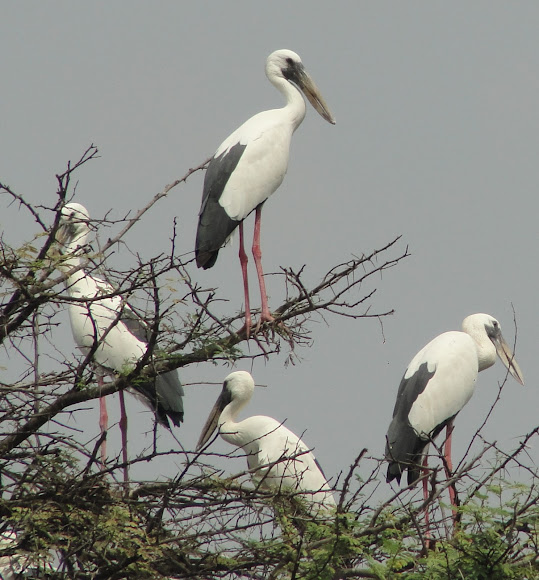 he Asian Openbill Stork is predominantly white with glossy black wings and tail having a green or purple sheen. The name is derived from the distinctive gap formed between the recurved lower and arched upper mandible of the beak in adult birds. Young birds do not have this gap. The cutting edges of the mandible have a fine brush like structure that is thought to give them better grip on the shells of snails.[2] The mantle is black and the bill is horn-grey. At a distance, they can appear somewhat like a White Stork or Oriental Stork. The short legs are pinkish to grey, reddish prior to breeding. Non-breeding birds have a smoky grey back instead of white. Young birds are brownish-grey and have a brownish mantle. Like other storks, the Asian Openbill is a broad-winged soaring bird, which relies on moving between thermals of hot air for sustained flight. They are usually found in flocks but single birds are not uncommon. Like all storks, it flies with its neck outstretched. It is relatively small for a stork and stands at 68 cm height (81 cm long).

The usual foraging habitats are inland wetlands and are only rarely seen along river banks and tidal flats. Birds may move widely in response to habitat conditions. Young birds also disperse widely after fledging. Individuals ringed at Bharatpur in India have been recovered 800 km east and a bird ringed in Thailand has been recovered 1500 km west in Bangladesh.[3][6] Storks are regularly disoriented by lighthouses along the southeast coast of India on overcast nights between August and September.[3] The species is very rare in the Sind and Punjab regions of Pakistan, but widespread and common in India, Sri Lanka, Burma and Thailand.