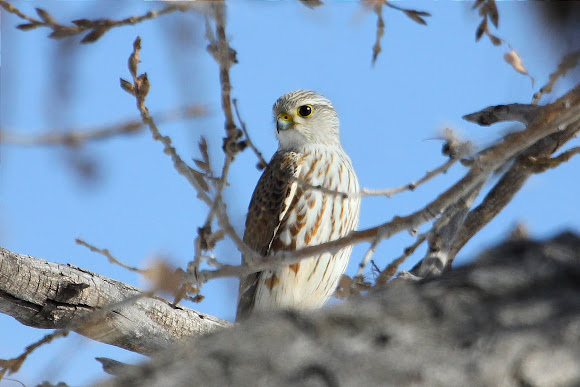 Merlins are small, fierce falcons that use surprise attacks to bring down small songbirds and shorebirds. They are powerful fliers, but you can tell them from larger falcons by their rapid wingbeats and overall dark tones. Medieval falconers called them “lady hawks,” and noblewomen used them to hunt Sky Larks. Merlin populations have largely recovered from twentieth-century declines, thanks to a ban on the pesticide DDT and their ability to adapt to life around towns and cities. Merlins are small falcons with a powerful build that is broader and stockier than the slightly smaller American Kestrel. Merlins have sharply pointed wings, a broad chest, and a medium length tail. Merlins are generally dark and streaky, though their coloration varies geographically and by gender. Adult male Merlins are slaty gray to dark gray; females and immatures are browner. The chest is usually heavily streaked and the underwings are dark. The dark tail has narrow white bands, and the face often lacks a prominent malar or “mustache” stripe.

This is the first half way decent photo I have ever taken of a merlin!

Thank you everyone! @Desmond.E.S.O, there are several subspecies of merlin in North America. The Prairie Merlin and Taiga Merlin are the two we see in Colorado. For your reference: http://www.allaboutbirds.org/guide/Merli...

Sorry... I thought that they were just called Merlins, not Prairie merlins.