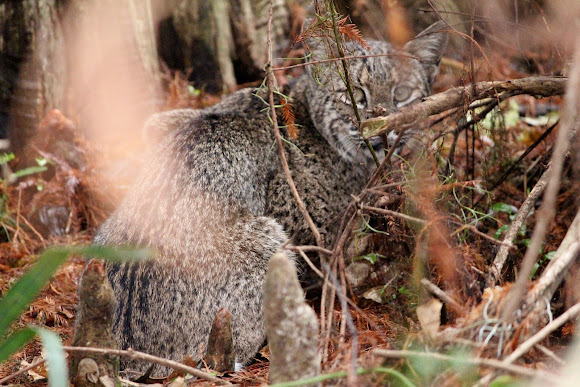 From National Geographic: Bobcats, sometimes called wildcats, are roughly twice as big as the average housecat. They have long legs, large paws, and tufted ears similar to those of their larger relative, the Canada lynx. Most bobcats are brown or brownish red with a white underbelly and short, black-tipped tail. The cat is named for its tail, which appears to be cut or "bobbed."

Circle B Bar Reserve, Lakeland, FL. Bobcats have an extreme adaptability to almost any environment. This one was found in a marshy swampland with alligators and wading birds like herons and egrets in abundance. It was hunting wading birds along a lake shore (about 5 feet from the shore in these photos). A cypress tree and some knees can be seen in the photos as well.

My 500th spotting on Project Noah! This one is special to me. On my third trip to this animal reserve, I was fortunate enough to see one of the most elusive animals that can be seen in this area. Friends of mine have hiked this reserve for years and never seen one. It was hunting wading birds right along the lakeshore and I was able to take these pictures through the brush from only about 10 feet away. I would have loved a truly clean picture but didn't want to disturb it any more than I already had.

merrypoppins77 - it literally crossed the hiking trail I was on and then went down the bank to the lakeshore. Purely a case of being at the right place at the right time. If I hadn't seen it moving, I would have walked this close to it without ever even seeing it.

Fyn Kynd - thank you for the nomination! I would be honored if I was selected.

Congrats! How get that close to it!?

Congrats on the bobcat, always exciting to see!