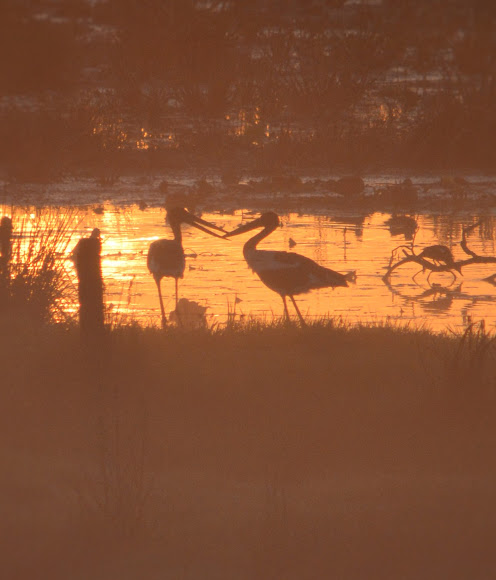 Large spectacular black and white bird standing almost 2 metres when fully grown. Wing span can reach well over 2 metres. Long red coloured legs, beak is long, strong and black. Head and neck black with a metallic blue/green/purple sheen, wings marked with black, body and wing tips brilliant white. Male has black eyes, female has yellow eyes, juveniles are more dusky brown until adult black and white plumage forms. In flight and gliding high on thermals the Jabiru seems graceful, but when taking off especially from ground level or coming in to land it is extremely awkward. Feeds on crustaceans, fish, amphibians, snakes, eels, often stalking slowly through water or flapping wings wide to chase up aquatic life before striking. Usually nests in top of tree or large bush but these have been observed on a flattened reed clump mass. Breeding is also described as being between March and June, although this pair take the opportunity to breed when seasonal conditions favour them often outside described breeding time.

Once widespread throughout much of eastern and northern Australia, now mostly known in more northern regions, but remains an uncommon bird. Prefers swamps, freshwater lagoons, mangrove and estuary swamps, flooded or waterlogged pastures, quiet open lake and stream areas. Found from southern areas such as Sydney in eastern NSW to far north Queensland and across top end into north west of Western Australia.

A breeding pair call 'my' swamp home, captured in the early morning sunrise over the headwaters of the Coldstream River on my new property. The clapping of bills can be heard from the back verandah. More detailed images to be posted soon.

Thanks Mark. The pair just flew in again for a rest after foraging elsewhere, but the lagoon is so crowded with other birds at present that they landed on a neighbouring stretch of the Coldstream!

Wonderful to have them on your land. Enjoy!

Thanks Neil. The swamp has a little more water in this week after recent heavy rain storms, and has filled with flocks of ibis - white, straw-necked and some glossy - lots of purple swamphens, dozens of Japanese or Latham's Snipe, and so much more. Perched about 6 metres up on the rise that overlooks it all is a great vantage point. Today a sea eagle flew over causing a mass explosion of birds in all directions. I remember as a child seeing Jabiru as regular visitors over my home in the Hawkesbury Valley. I doubt they'd find the place inviting these days!

Wonderful spotting. I definitely thought they were a northern species, and am surprised they'd be as far south as Sydney. Lucky you to have a swamp... and a pair of Jabiru's.