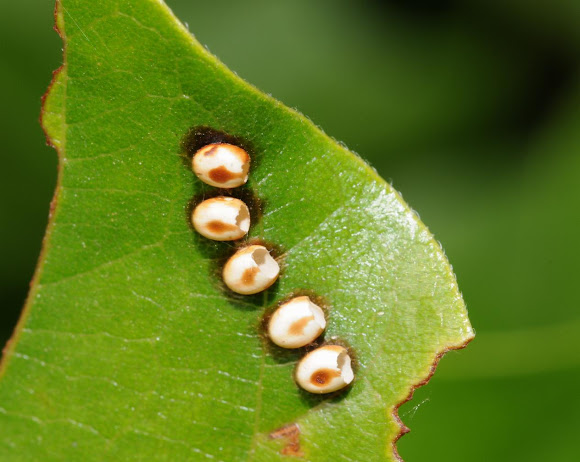 The Cecropia moth is North America's largest native moth. Females, which are larger than males, have wingspans recorded at up to 16 cm. Cecropia moths belong to the Saturniidae, or giant silk moth family. They live in eastern North American forests as far west as the Rocky Mountains. The larvae of these moths are most commonly found on Ash-leaf Maple (Acer negundo) and Sugar Maple (A. saccharinum) trees, but also feed on wild cherries and plums (Prunus), apples (Malus), alder and birch (Betulaceae), dogwoods (Cornus), and willows (Salix). Caterpillars feed together as young instar siblings, but become solitary as they mature. When full grown, they spin a silk cocoon, which they attach to a branch of their host plant, and overwinter as a pupa within. Adult moths emerge in the spring. Adults have no mouthparts and do not feed, living only long enough to mate and lay eggs. (information from Encyclopedia of Life)

Found on buttonbush, next to a small pond

I was poking around a buttonbush and noticed the cluster of eggs. That led me to 4 larvae, which I didn't recognize immediately. Some searching online when I got home solved the larval mystery - cecropia moth babies! I think I caught them in their 2nd instar, which shows a lot more yellow than the 1st instar does. Now that they've molted again, they have the bright coloration that I am used to seeing. I brought 2 of them home to raise up so my soon-to-be 6 year-old daughter can watch the process. I have easier access to sweetgum than buttonbush so they'll eat that from here on out.

I Love the caterpillar!

I added another image to this spotting.

I checked in on the cats today and they're getting BIG. I need to update this spotting with a new image.

Thank you. I plan on finishing the series as the caterpillars grow and pupate.

whoa! those are amazing!

I know my lead image is boring but I wanted to take this series in chronological order. Enjoy!