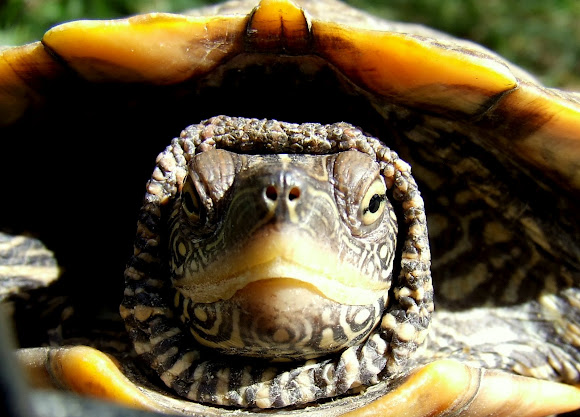 Northern map turtles inhabit an area from south Quebec and Ontario to northern Vermont where it lives in the St. Lawrence River drainage basin. Its range extends west through the Great Lakes and into southern Wisconsin and eastern Minnesota, west of the Appalachians, south to Kansas, northwestern Georgia. It also occurs in the Susquehanna River system located in Pennsylvania and Maryland and also in the Delaware River. HabitatThe northern map turtle inhabits ponds, rivers and lakes. They prefer large bodies of water and areas with fallen trees and other [[debris]] for basking. These turtles are more often found in rivers than in lakes or ponds. They are found in larger rivers and lakes in the northern portion of their range but are more likely to live in smaller rocky rivers and streams in the south and west.

The northern map turtle gets both its common and scientific names from the marking on the skin and carapace. The light markings resemble contour lines on a map or chart. The lines on the carapace are shades of yellow, tan, or orange and are surrounded by dark borders. The rest of the carapace is olive or greyish brown. The carapace markings on older individuals tend to fade but are usually still apparent when the shell is wet. The carapace has a hydrodynamic appearance and is broad with a moderately low keel. The rear of the carapace is flared and the rear marginals form serrations. The plastron is yellowish and is marked by a central dark blotch (plastral figure) that follows the sutures of the plastral scutes and fades with age so that many adults lack a pattern all together (i.e., the plastron is immaculate). The head, neck and limbs are dark olive, brown, or black with thin yellow or green stripes. There is an oval or triangular spot located behind the eye. Like other map turtles, this species exhibits extreme sexual size dimorphism.[4] Males are 10–16 cm (3.9–6.3 in) in carapace length and weigh between 150–400 g (5.3–14 oz), while females are 18–27 cm (7.1–11 in) in carapace length and weigh around 0.5–2.5 kg (1.1–5.5 lb). Females have a much wider head than males and this is associated with differences in feeding. Males have a narrower carapace with more distinct keel, narrower head, and a longer, thicker tail. Unlike females, the opening of the cloaca is beyond the rear edge of the carapace. Young map turtles have a pronounced dorsal keel. Hatchlings have a round grayish-brown carapace that is about 2.5 cm (0.98 in) long.

the place was there but it was not visible,next time i'll ask for furder info about,they say that she ocour also freely in the park,so i'am sure that i'll found one one of these days :)

We would love to see "Mauremys Leprosa"
the turtle situation is bad all over.

thanks everybody that help me in the id.based in your tips i think i put the photos ok for this one,now i'am going to load the other two species.today i've been there and i distinguish the 3 species,they are all from abrode,and these gather here are ababdoned turtel pets :(
they have a red sign saying: PEOPLE DONT BY TURTLES,the tuertles from here are in very bad position with this alien invansion,in the park there are the Mauremys Leprosa,but i dont saw her,i promise that i'll search better ,it's the only natural from here

Neil,Emma and Sophia,from what you say i have at list 3 species in the photos,so i'am going to the Park again,make much more photos,trieing to distiguish the several species and then make separate spottings,until there(one or two days more),i'll let the spotting like he is ,ok?
And thanks very much for your's precious help

Antonio, to clean things up here due to multiple species in the photos, I suggest splitting up this spotting into multiple spottings so we can try to get just one species in each spotting, and then we can help ID and label each one accurately. Thank you! I love that 4th picture by the way, lots of turtles!

that first picture is amazing!

Antonio, nice spotting! You have multiple species here. I know you have a red-eared slider in photo 3. Photo 4 has many more: red-eared sliders, yellow-bellied sliders, and more. Photos 1 & 2 look like map turtles in the genus Graptemys, but I can't say for sure.

He looks like hes got tattoos on his face. Very cool.