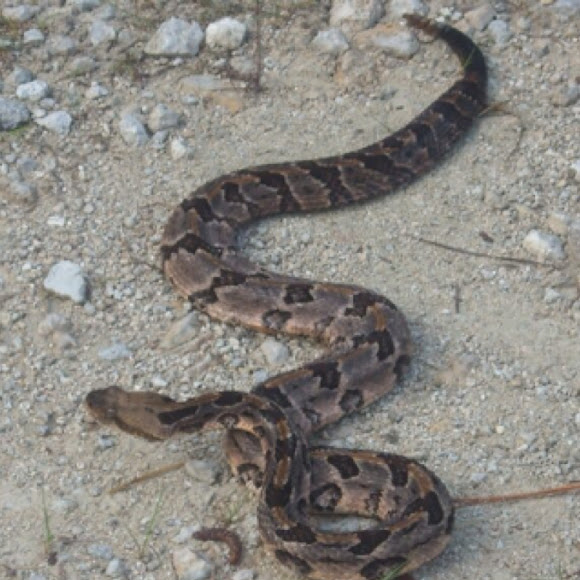 The so-called canebrake occupies a coastal to piedmont habitat, comfortable in swampy lowlands, sand hills and upland habitats. Within South Carolina, the lowland population is separated from the mountain and foothills population by a narrow strip of piedmont that contains no currently discernible population. Individuals in the mountain population are often called timber rattlesnakes and are more likely to be darker-colored than individuals from the midlands eastward.

A medium-sized adult snake,this individual was encountered crossing a dirt road about 4:00 pm. My pickup truck was heavily packed for camping, and my snake hook and bags were nowhere to be found. I photographed the snake while waiting for other Under a Low Country Moon participants to arrive with snake hooks. Still waiting, I used a rotten pine branch upon which to balance the snake and thus walked it to my pickup truck, dropping it and picking it up multiple times. The snake remained calm during this procedure and I finally used the branch to lift the snake into the bed of my truck while I awaited help. ULCM folks arrived and we had to unload the truck bed's contents in order to retrieve the snake, which had crawled under my camp carpet. It was retrieved with snake tongs, taken to camp, photographed and then released where found.

Wow, quite a procedure to get that spotting!