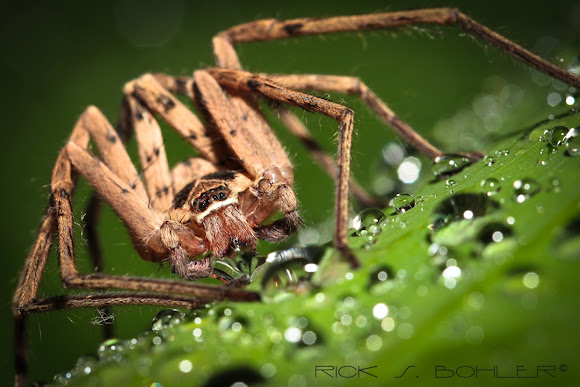 Heteropoda venatoria is a large brown spider with a flattened body structure and very little dorsal pattern. Adult specimens have a body length of 2.2 to 2.8 cm (about 1 inch), and have a leg span of 7 to 12 cm (3 to 5 inches). Adult females have a larger body size, especially the abdomen, than males. Adult males have longer legs than females, and the long male palpi have the terminal segment enlarged and the ventral sclerites exposed, as in most true spiders. Both sexes have a yellow to cream clypeus and a wide marginal band encircling the rest of the carapace, tan in females and cream in males. In addition, males have a dark, longitudinal stripe on the abdomen and a light-bordered pale area behind the eyes. The legs of both sexes have distinct black spots from each of which arises an erectile macroseta. Otherwise, the spider is not conspicuously hairy.

Females of H. venatoria make flattened, disc-like eggsacs about 1.5 cm in diameter which contain over 200 eggs. The eggsac is carried under the body, its size and shape probably causing the female to remain relatively immotile. All stages of development of juveniles and adults appear to occur simultaneously throughout the year. This and similar species are highly valued in tropical countries because they capture and feed on cockroaches and other domestic insect pests. As with other vagrant spiders, huntsman spiders do not use webs to capture prey. Their great speed and strong chelicerae (mouthparts) are used to capture the insects on which they feed. Poison is also injected into the prey from glands extending from the chelicerae into the cephalothorax. The flattened body enables this large spider to fit into surprisingly small cracks and crevices. This ability, along with its adaptability to human habitations, helps explain its frequent occurrence in houses, barns, sheds, under boards on the ground, and in other sheltered areas. Being cold-sensitive, these spiders cannot exist outdoors in areas with freezing winter temperatures; occasionally they occur in greenhouses and other heated buildings in temperate climates. On the other hand, in southern Florida where frost is rare, these spiders have become "wild" (i.e., no longer requiring man-made structures). In the Homestead area, H. venatoria is now established in the "wild" and is common in avocado groves (Whitcomb unpublished). They can be easily collected at night by using a headlight (Wallace 1937) as their eyes reflect light, appearing as blue spots on the trunks of trees and on the ground, much like wolf spiders.

So very informative! THANKS! I had one of these in my home last week (see my posting of same species here in this mission..). Scared the daylights out of me. LOL

Lovely Macro Rick ,and a nice piece of equipment too:-)

CRAZY shots Rick, what are you shooting with?