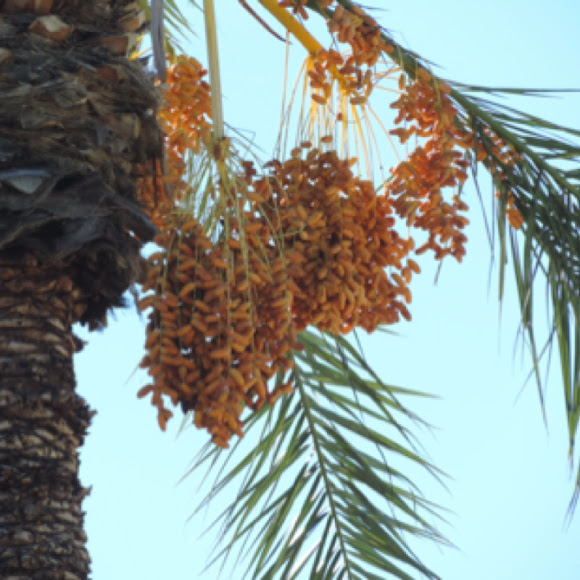 Description The date is an erect palm to 100 or 120 ft (30.5-36.5 m), the trunk clothed from the ground up with upward-pointing, overlapping, persistent, woody leaf bases. After the first 6 to 16 years, numerous suckers will arise around its base. The feather-like leaves, up to 20 ft (6 m) long, are composed of a spiny petiole, a stout midrib, and slender, gray-green or bluish-green pinnae 8 to 16 in (20-40 cm) long, and folded in half lengthwise. Each leaf emerges from a sheath that splits into a network of fibers remaining at the leaf base. Small fragrant flowers (the female whitish, the male waxy and cream colored), are borne on a branched spadix divided into 25 to 150 strands 12 to 30 in (30-75 cm) long on female plants, only 6 to 9 in (15-22.5 cm) long on male plants. One large inflorescence may embrace 6,000 to 10,000 flowers. Some date palms have strands bearing both male and female flowers; others may have perfect flowers. As the fruits develop, the stalk holding the cluster may elongate 6 ft (1.8 m) while it bends over because of the weight. The fruit is oblong, 1 to 3 in (2.5-7.5 cm) long, dark-brown, reddish, or yellowish-brown when ripe with thin or thickish skin, thick, sweet flesh (astringent until fully ripe) and a single, cylindrical, slender, very hard stone grooved down one side.

This tree was growing beside a hotel near I-10 in Tucson.

The date palm is believed to have originated in the lands around the Persian Gulf and in ancient times was especially abundant between the Nile and Euphrates rivers. Alphonse de Candolle claimed that it ranged in prehistoric times from Senegal to the basin of the Indus River in northern India, especially between latitudes 15 and 30. There is archeological evidence of cultivation in eastern Arabia in 4,000 B.C. It was much revered and regarded as a symbol of fertility, and depicted in bas relief and on coins. Literature devoted to its history and romance is voluminous. Nomads planted the date at oases in the deserts and Arabs introduced it into Spain. It has long been grown on the French Riviera, in southern Italy, Sicily and Greece, though the fruit does not reach perfection in these areas. Possibly it fares better in the Cape Verde Islands, for a program of date improvement was launched there in the late 1950's. Iraq has always led the world in date production. Presently, there are 22 million date palms in that country producing nearly 600,000 tons of dates annually. The Basra area is renowned for its cultivars of outstanding quality. The date has been traditionally a staple food in Algeria, Morocco, Tunisia, Egypt, the Sudan, Arabia and Iran. Blatter quotes the writer, Vogel, as stating: "When Abdel-Gelil besieged Suckna in 1824, he cut down no fewer than 43,000 trees, to compel the town to surrender; nevertheless, there are still at least 70,000 left."