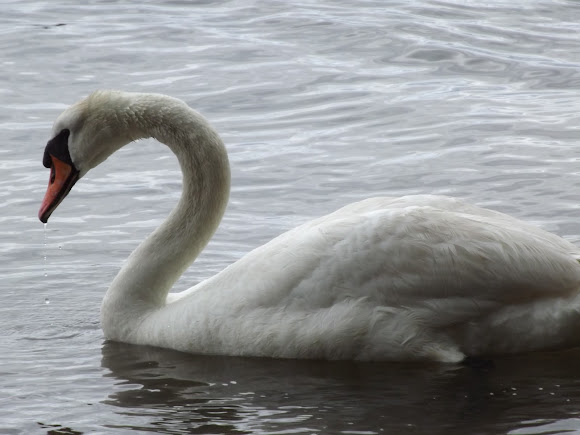 Adults of this large swan typically range from 140 to 160 cm (55 to 63 in) long, although can range in extreme cases from 127 to 170 cm (50 to 67 in), with a 200 to 240 cm (79 to 94 in) wingspan. Males are larger than females and have a larger knob on their bill. On average, this is the second largest waterfowl species after the Trumpeter Swan, although male Mute Swans can easily match or even exceed a male Trumpeter in mass. The Mute Swan is one of the heaviest flying birds, with males (known as cobs) averaging about 12 kg (26 lb) and the slightly smaller females (known as pens) weighing about 9 kg (20 lb). While the top normal weight for a big cob is 15 kg (33 lb), one unusually big Polish cob weighed almost 23 kg (51 lb) and this counts as the largest verified weight for a flying bird, although it has been questioned whether this heavyweight could still take flight. Its size, orange-reddish bill and white plumage make this swan almost unmistakable at close quarters. Compared with the other Northern white swans, the Mute Swan can easily be distinguished by its curved neck and orange, black-knobbed bill. Unlike most other Northern swan species (who usually inhabit only pristine wetlands without regular human interference), the Mute Swan has, in some parts of the world, become habituated and fearless towards humans. Such swans are often seen at close range in urban areas with bodies of water. Young birds, called cygnets, are not the bright white of mature adults, and their bill is dull greyish-black, not orange, for the first year. The down may range from pure white to grey to buff, with grey/buff the most common. The white cygnets have a leucistic gene. All Mute Swans are white at maturity, though the feathers (particularly on the head and neck) are often stained orange-brown by iron and tannins in the water. The morph immutabilis ("Polish Swan") has pinkish (not dark grey) legs and dull white cygnets; as with white domestic geese, it is only found in populations with a history of domestication.

The Mute Swan is found naturally mainly in temperate areas of Europe across western Asia, as far east as the Russian Maritimes, near Sidemi. Gmelin (1789) and John Latham (1824)[12] reported Mute Swans present in Kamchatka in the 18th century. It is partially migratory throughout northern latitudes in Europe and Asia, as far south as north Africa and the Mediterranean. It is known and recorded to have nested in Iceland and is a vagrant to that area, as well as to Bermuda, according to the U.N. Environmental Programme chart of international status chart of bird species, which places it in 70 countries, breeding in 49 countries, and vagrant in 16 countries. While most of the current population in Japan is introduced, Mute Swans are depicted on scrolls more than a thousand years old, and wild birds from the mainland Asian population still occur rarely in winter.

http://en.wikipedia.org/wiki/Mute_Swan#D... This pair of swans was foraging with some Canada Geese by the tideline of wetland.