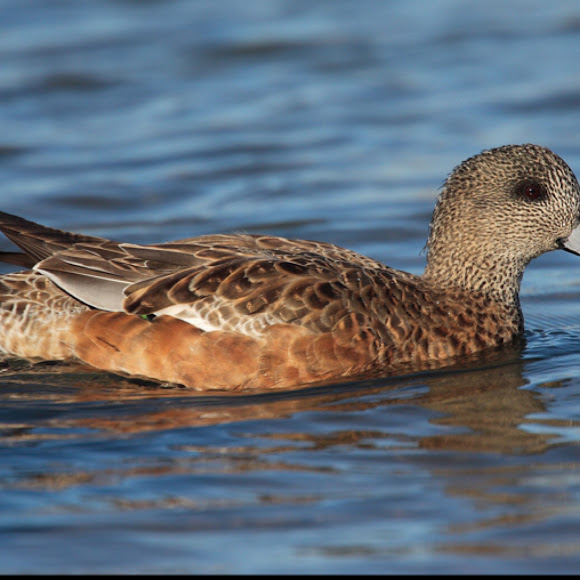 From Wikipedia: The American wigeon is a medium-sized bird; it is larger than a teal, but smaller than a pintail. In silhouette, the wigeon can be distinguished from other dabblers by its round head, short neck, and small bill. It is 42–59 cm (17–23 in) long, with a 76–91 cm (30–36 in) wingspan and a weight of 512–1,330 g (1.129–2.932 lb). This wigeon has two adult molts per year and a juvenile molt in the first year, as well. The breeding male (drake) is a striking bird with a mask of green feathers around its eyes and a cream colored cap running from the crown of its head to its bill. This white patch gives the wigeon its other common name, baldpate (pate is another word for head). Their belly is also white. In flight, drakes can be identified by the large white shoulder patch on each wing. These white patches flash as the birds bank and turn. In non-breeding (eclipse) plumage, the drake looks more like the female.

It looked just like a mallard duck but the sound it made gave it away. It has a white patch on its head and from online descriptions, it is apparently smaller than a mallard but when it is among the mallards it is hard to tell.