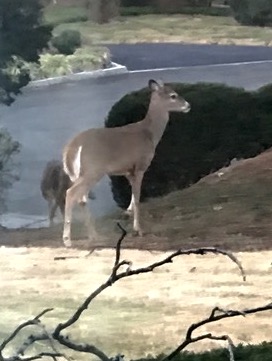 I looked out of the window, and I saw three, white-tailed deer, eating grass from the front lawn. There were two adults, and one younger deer. The white-tailed deer, also known as the whitetail, is a medium-sized deer, native to the United States, Canada, Mexico, Central America and South America, as far south as Peru and Bolivia. The white-tailed deer, is so named because, the white underside of the deer's tail, waves when running, and is flashed as a warning, when danger is sensed.

It is found in aspen parklands and deciduous river bottomlands, within the central and northern Great Plains, and in mixed deciduous riparian corridors, river valley bottomlands, and lower foothills, of the northern Rocky Mountain regions, from South Dakota and Wyoming, to northeastern British Colombia, including the Montana Valley and Foothill grasslands. White-tailed deer, are found in a majority of North America, and parts of Central and South America. They are generalists, which means they can adapt to a wide variety of habitats. The most common place a deer will live, is in a wooded area.

I was looking out of the window, and I saw three, white-tailed deer, eating grass from the front lawn. There were two adults, and one younger deer.