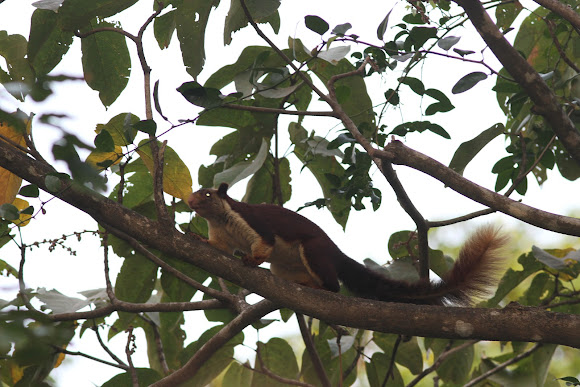 The Ratufa indica has a conspicuous two-toned (and sometimes three-toned) color scheme. The colors involved can be creamy-beige, buff, tan, rust, brown, or even a dark seal brown.The underparts and the front legs are usually cream colored, the head can be brown or beige, however there is a distinctive white spot between the ears

As can be seen in the range map of this species, it occupies isolated ranges that are widely separated from each other, thus producing conditions favorable for speciation. The squirrels found within each of these isolated ranges share distinctive color schemes, making it easy to identify which region a particular squirrel is from, as well as leading to the controversy (see section below on Subspecies) as to whether these different color schemed subspecies ought to be considered as unique species

It can also be seen near the urban areas of kodaikanal