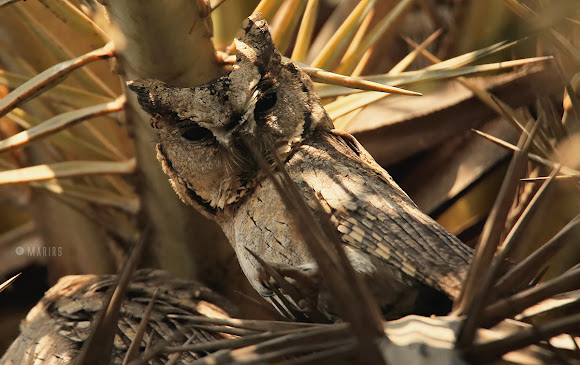 The collared scops owl is an owl which is a resident breeder in south Asia from northern Pakistan, northern India and the Himalayas east to south China. It is partially migratory, with some birds wintering in India, Sri Lanka and Malaysia. This species was formerly considered to be included within what is now separated as the Indian scops owl (Otus bakkamoena). This species is a part of the larger grouping of owls known as typical owls, Strigidae, which contains most species of owl. The other grouping is the barn owls, Tytonidae. The collared scops owl is a common breeding bird in forests and other well-wooded areas. It nests in a hole in a tree, laying 3-5 eggs. The collared scops owl is a small (23–25 cm) owl, although it is the largest of the scops owls. Like other scops owls, it has small head tufts, or ears. The upperparts are grey or brown, depending on the subspecies, with faint buff spotting. The underparts are buff with fine darker streaking. The facial disc is whitish or buff, and the eyes are orange or brown. There is a buff neckband. Sexes are similar. The flight is deeply undulating.