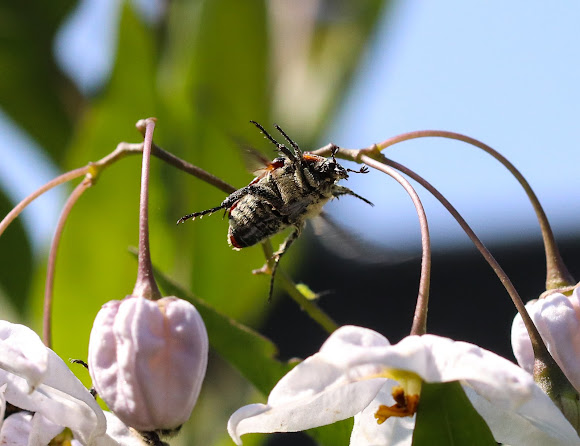 With its bulky and robust 'scarab beetle' design, there was quite a brawl going on in this potato vine (Solanum jasminoides). A female had arrived on the flowering hedge and by sending out a pheromone she was attracting male beetles who arrived and battled for mating rites with her. They tried everything from trying to disloge a male who was already on her back to pushing each other around. In some cases males were mistaking other males for the female and it all rendered into quite a scene to behold. These beetles are considered pollonators by pushing their way into flowers and collecting the nectar. Their jaws also allow them to eat the flower parts such as the anthers and petals which can lead to damage on the host plant.

Diverse and far reaching from urban gardens to open grassland and mountain forest.

Hi Tukup! Thanks for the comment, a little luck wins the day!! :)

Great photography Michael. Thanks for sharing.