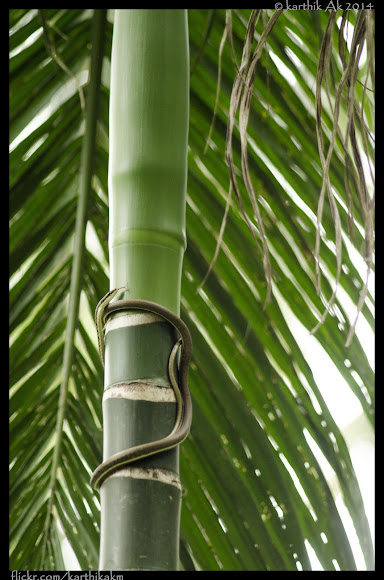 It had been a while before i headed out to do some macro stuff in the outskirts of the urban jungle. Vipin n I decided and planned for a weekend visit to find some interesting subjects. For an hour or so we spent photographing some interesting subjects, we observed documented and went ahead and took rest for few minutes. On the way back Vipin introduced me to mmm!! a tasty fruit which is very widely known for its seeds but many don't know that the fruit is edible. while we were feasting on the fruits, a brown slender thing caught my attention. "vipin a snake" i said," vipin-"where where" me- "there on the arecanut tree". we were excited to see the snake. It was motionless for a while, we photographed it and started observing him. He was trying to climb up the tree. The light green part of the tree was so smooth, the snake couldn't get a proper grip. We thought he would make it to the top, however he slipped and fell on the ground. We tried to locate him but he disappeared into the thick grass below. It was good to see such a beautiful snakes in the urban jungle!