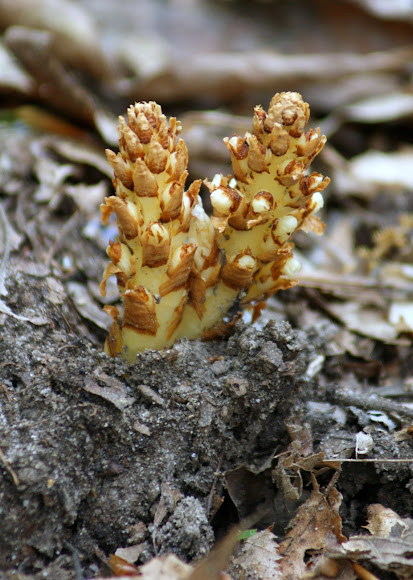 Squawroot is a perennial, non-photosynthesizing (or "achlorophyllous") parasitic plant, from the family Orobanchaceae and more recently from the genus Conopholis but also listed as Orobanche. When blooming, resembles a pine cone or cob of corn growing from the roots of mostly oak and beech trees. It is parasitic on the roots of woody plants, especially oaks (genus Quercus) and beech (genus Fagus). The only part of the plant generally seen is the cone-shaped inflorescence, which appears above ground in spring. The entire structure is a yellowish color, turning to brown and achieves heights of 10 centimeters (4 in) to 20 centimeters (8 in) tall.

It is native but not endemic to North America. This one was spotted at the Stevens Creek Heritage Preserve near Clarks Hill (McCormick County), SC.

It is also called American cancer-root and bear corn.