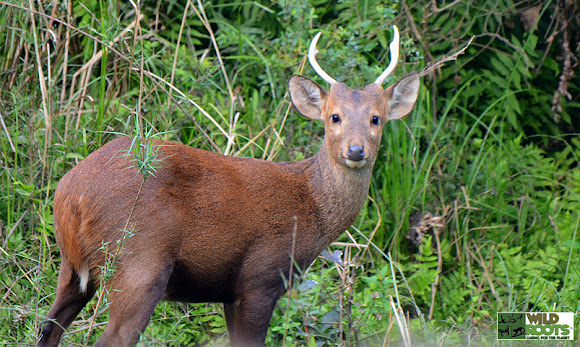 The Indian hog deer (Hyelaphus porcinus) is a small deer whose habitat ranges from Pakistan, through northern India, to mainland southeast Asia, which inhabits much of the Indo-Gangetic Plains of Pakistan, northern India, Nepal, Bangladesh, southwestern Yunnan Province in China, all the way to western Thailand.

It gets its name from the hog-like manner in which it runs through the forests with its head hung low so that it can duck under obstacles instead of leaping over them like most other deer. Cover is taken as soon as it is feasible. During flight, the tail is held erect, showing the white underside. Traditionally there have been two classified subspecies of hog deer: Indian hog deer (Hyelaphus porcinus porcinus) and the Indochinese hog deer (Hyelaphus porcinus annamiticus). However recent morphological studies indicate they are better off as two separate species.