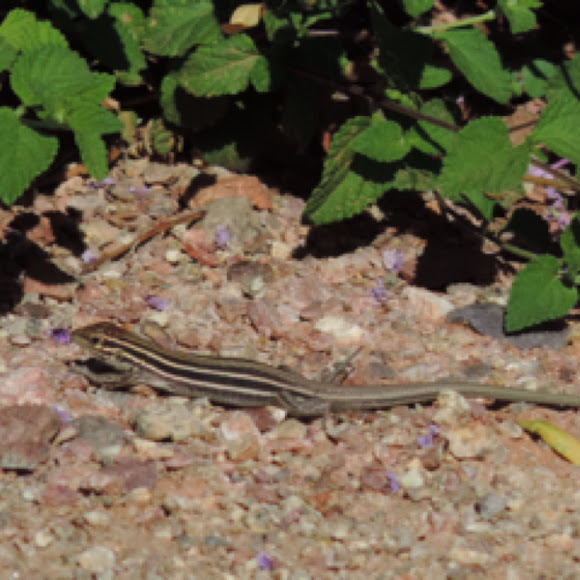 The Sonoran Spotted Whiptail is a moderate-sized whiptail (< 93 mm SVL) with a dorsal pattern of 6 distinct light stripes on a brown to chocolate-brown background in both adults and juveniles. The stripes may fade in the oldest individuals but always remain distinct on the neck. In the dark fields between the dorsal stripes are small, light spots that usually do not overlap the stripes; although hatchlings and young juveniles lack spots. Rarely, adults may show blue coloration on the head, neck, limbs, tail, and sides of the body. There are 5-8 scales between the paravertebral light stripes and 74-80 granular dorsal scales around the mid-body. The mesoptychial scales (in the gular region of the throat) and postantebrachial scales (on the central rear surface of the forearm) are distinctly enlarged. Typically there are three (sometimes more) enlarged preanal scales. Throughout life, the long tail is brown or tan, sometimes with faint orange hues, and sometimes with an olive tint towards the tip. The dorsal surface of the hind limbs is mottled or may have dark stripes (but not with small light spots), especially in juveniles. The venter is unmarked and cream-white. The Sonoran Spotted Whiptail is an all-female, parthenogenetic species.