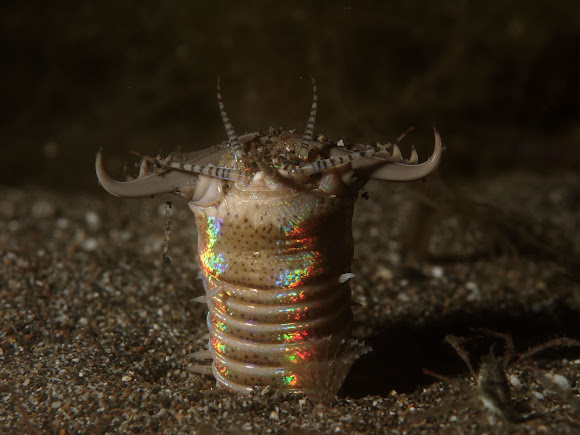 This is one worm that you don't want to mess with even though you are only likely to see 5-8 cm of them outside their hole or above the sandy bottom. The name "Bobbit worm" was coined in the 1996 book Coral Reef Animals of the Indo-Pacific, in reference to Lorena Bobbitt, who was then very much in the public consciousness. The name is inspired only by the scissorlike jaws of the worm; the common supposition from the name that female eunicids cut off the males' penises is baseless, and the worms in fact lack penises entirely, as they are broadcast spawners. Bobbit Worm is an aquatic predatory polychaete worm dwelling at the ocean floor. An ambush predator, the animal buries its long body into an ocean bed composed of gravel, mud, or corals, where it waits for a stimulus to one of its five antennae, attacking when it senses prey. Armed with sharp teeth, it is known to attack with such speed that its prey is sometimes sliced in half. They inject a toxin in their prey, which stuns or kills it, such that prey much larger than the worm itself can be eaten and digested. They can grow up to 3 meters in length although most likely around 1 meter in average length.

Sandy bottom in the shallow reefs.

Congratulations Albert! The most interesting worm I've ever read about :)

Another and final round of congratulations Albert! This favorite for many placed 3rd in our 2016 Best Photo mission (category Others)!

Amazing Albert,fantastic find,great info us usual :-),very good work you have,congrats on the well deserved SOTW and thanks for sharing

Interesting indeed, @ChunXingWong. Can't tell for sure unless can see a picture of it :D. Try going back to Manukan to look for it, if its a new species :p

Congrats to you Albert for this excellent SOTD...! Great work!

I am not sure AlbertKang. The one I saw in Manukan is quite small, only about 5mm in diameter. It hide in a burrow in the sands. Whenever the tides and waves comes in, it will emerge to bite and scavenge everything near it. It does have a complex mouth part, strong and sharp enough to bite and grab hold onto any items I put near it, something even tearing them apart. It moves very fast though. It was sensitive when I tried to disturb it. I tried digging it out but I realize that the tunnel goes all the way deep down. Maybe a new species. Haha

@ChunXingWong - I am not sure if what you saw in Manukan is a Bobbit Worm. You are unlikely to see them at the beach. You might have mistaken a Sea Cucumber to Bobbit Worm, Same thing as another PN Member JordiPratts did, who thought the Synaptid Sea Cucumber he saw was Bobbit Worms. Synaptip Sea Cucumber are longish, more than 1 meter in length and they have a well-developed array of feather-like feeding tentacles which they use to move organic food into their mouths. Check out this website to see them :

Cool spotting AlbertKang!
I used to play with one on the beach in Manukan island when I was young. I experimented it by putting all sorts of things onto it to just watch it bite them and drag them down into its hole.

Thanks, @Daniele and PN Rangers for this SOTW :)

Congratulations Albert, this astonishing worm was voted Spotting of the Week! With many thanks for your ongoing outstanding contributions to Project Noah.

Congrats for the nomination!

Thank you Albert, glad to hear they are not laying in wait for me on some beach :)

Thanks, @Desmond and @Gilma - its a nomination and the other Spottings nominated are equally amazing.

@Lauren, it is unlikely you will step on one. They are very 'shy' animal and very often if you get close to them with light (as they only appears at night to hunt), they will retract back into their hole and it could be a long wait for them to appear again. Also, when I mentioned shallow reefs, its like at least 3 meters depth, so its not possible for non-divers to 'walk' into those depths and for scuba divers, we don't walk on the sea bottom :D

What happens Albert if you step on this? Will it bite you and poison you?

Love this spotting, Albert, it seems to acctually be true to it's name. It has to make it for SOTW. Congratulations, and Thank you for sharing.

Thanks too, @Ashley for the nomination :)