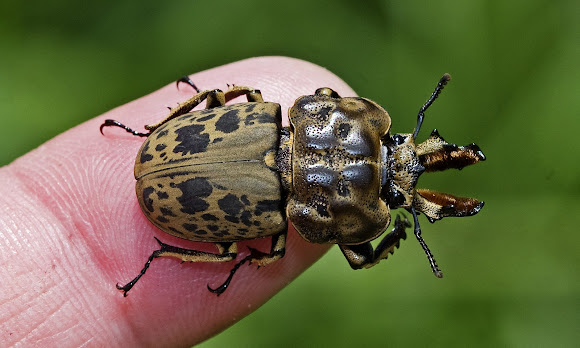 One day in late 2008 in Yugarapul park, I accidently stepped on a rotten tree trunk lying in the bush and snapped it while chasing a beautiful butterfly near the Bulimba creek. I found a pair of Brown Stag beetles inside the broken tree trunk. That was the first time I had a close encounter with the amazing beetles and learnt the existence of such creature. However, after that day and until a few days ago(15 Dec, 2014), I never had another chance to see them again despite the fact they are common in Queensland. I am a big fan of beetles and the desire to get my hands on the brown stag beetles again gnawed at me. With a few weeks’ holidays to spend on my hobbies at the end of the year, my hands were itchy and I felt it was the right time to try my luck again. Before I set out to find them, I did some goolging on the information on the Brown Stag Beetle. From the information gleaned, I learnt they actually live their entire lives inside rotten tree trunks and it felt like a plausible explanation why I hadn’t seen them again in so many years. It never occurred to me before that rotten log was the obvious place to search for the beetles although it was the place where I found them initially. Armed with the knowledge of the beetles’ habits, I knew where to look for them this time. The place where I decided to carry out my exploration was the same place where I first saw the beetles. There are a lot of trees growing along the Bulimba creek with thick canopies, creating a very humid and shady environment underneath. Inside that environment the fallen trees are abundant, many of them rotten. I set my sights on a medium size fallen tree that seemed to be thoroughly rotten because a gentle kick caused a large chunk of it to break off. It all looked very promising to me. My first dig using a screwdriver near the root of the tree broke it into two halves and immediately something black inside caught my eyes. I was elated and carefully picked them up and placed them in my hands. There was no doubt they were stag beetles because the hallmark of the stag beetle, the mandibles, were on top of their heads but they were not exactly the brown stag beetles I was looking for because they were totally black. Initially I thought I found a different type of stag beetle! But then something strange happened. While they were in my hands, the colours on their backs were gradually changing! At the very beginning, they were indeed black, but within a few seconds, their colours changed to reveal the patterns of the Brown Stag beetle that I was searching for! In hindsight, I think when they are wet, their brown sheaths become black and only when they are dry do the brown colour and the beautiful marks show up. At home, I did more search on the colour change of the beetle. I haven’t found any information on the English sites but one Chinese site describes the same colour change I have witnessed (http://komurohu.pixnet.net/blog/post/386...)

What an amazing find and a superb write-up with your thorough research.

I will be adding a screwdriver to my bug safari kit from now on :)

Awesome find HongmingKan,congrats on the well deserved SOTD and thanks for sharing

What an excellent story about the beetle. Had it not been the SOTD, this lovely story would have been missed.great job!

It is such an honour to be selected SOTD! Thank you very much for your interests and supports!

Congratulations on the SOTD HongminKan .. What a great reward for your research and digging about.

A much deserved SOTD. Congratulations :-)

Congratulations! This beautiful beetle has earned you your very first Spotting of the Day! Thanks for sharing such wonderful photos and such an awesome story. I expect that this is only the first of many Spotting of the Day honors to come. All the best and congrats again!

Excellent find and a great story, congrats and thanks for sharing!

Great description!I hope I find one of these some day.

Sad if true. Hopefully it's still somewhere outside Bris.

Hi Neil, Thanks for the tips. My mate did his PhD in entomology in UQ and is working for the Queensland Museum now. He is also very keen on finding golden stag beetle in Brisbane too but failed. That's why I am guessing this kind of beetle is on the verge of extinction.

I've not come across any that I'm aware of, but then, I haven't been actively looking. A mate of mine did his masters in Agriculture Entomology, but he's away at the moment so I can't pick his brains. I'm sure any of the uni's will have keen Entomologists who do regular forays in and around Brisbane. Perhaps they can give you some useful leads.

I am glad to know you are in Brisbane as well. I wonder if you have ever seen any Golden Stag beetles(Lamprima latreillii)? I have spent years trying to find them but to no avail. I was told they are common but so far, I only found two dead ones. It really looks to me that they are not common at all, or maybe even endangered.

That's a great reference link too! Excellent photos, and I have a Chinese border (UQ) so he can do the translation for me. Your description is brilliant, and that needs no translating. I see what you mean about the beetle being black when wet.

Camo gear, indeed. I'm in Brisbane too but I've never seen one of these beauties, although if they live their lives inside rotten tree trunks, that may account for it. Cool spotting :-)

According to my observation, they become black when they are wet. Because the inside of the rotten log is pretty humid, they all appear black when freshly dug out of the log. After the water on the outside of their bodies evapourated, their blown colour and black marks became visible. This colour change can also be seen on dead beetles as well.

Beetles in camo gear ! Not only are they great looking but for those patterns to emerge when ? threatened- that's awesome !!

One of the best I've seen and thanks so much for the story, the series and for sharing it with us. Just brilliant.