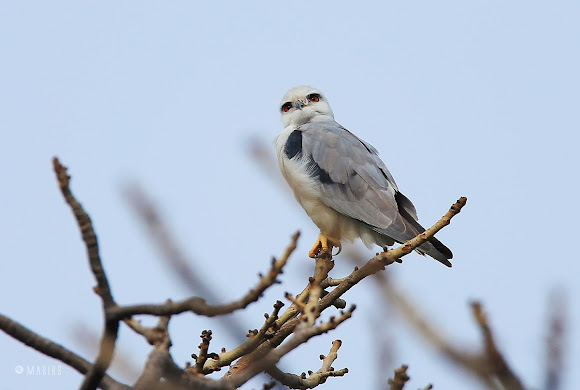 The black-shouldered kite or Australian black-shouldered kite is a small raptor found in open habitat throughout Australia and resembles similar species found in Africa, Eurasia and North America, which have in the past also been named as black-shouldered kites. Measuring 35–38 cm (13.8–15 in) in length with a wingspan of 80–95 cm (31.5–37.4 in), the adult black-shouldered kite is a small and graceful, predominantly pale grey and white, raptor with black shoulders and red eyes. Their primary call is a clear whistle, uttered in flight and while hovering. Though reported across Australia, they are most common in the south-east and south-west corners of the mainland. Their preferred habitat is open grasslands with scattered trees and they are often seen hunting along roadsides. Like all the elanid kites, it is a specialist predator of rodents, which it hunts singly or in pairs by hovering in mid-air above open land. Black-shouldered kites form monogamous pairs, breeding between August and January. The birds engage in aerial courtship displays which involve high circling flight and ritualised feeding mid-air. Three or four eggs are laid and incubated for around thirty days. Chicks are fully fledged within five weeks of hatching and can hunt for mice within a week of leaving the nest. Juveniles disperse widely from the home territory.