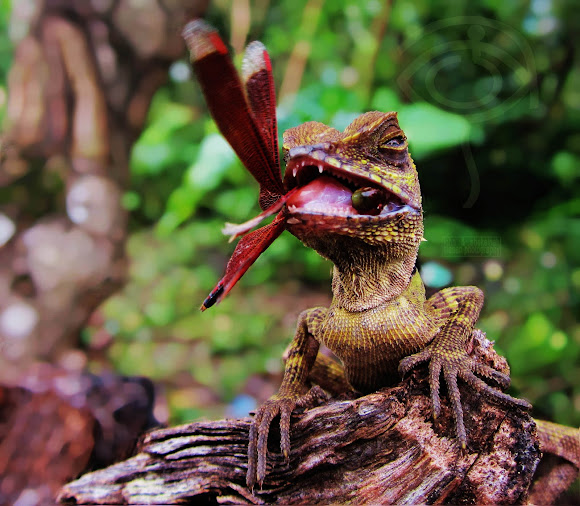 This specimen is a juvenile and has a body length of about 5 inches excluding the tail. as far as I know it grows up to a length of about 10 inches. This species is present within the protected area on the NW-Panay Peninsula (M. Gaulke pers. comm. 2008). Further studies are needed into the taxonomy, distribution, abundance, natural history, and threats to this species. There is an urgent need to review the taxonomy of the Philippines Gonocephalus to better determine the distributions of the three species. Major Threat(s): Habitat loss due to deforestation is considered to be the major threat to this species. There is an increasing threat from collection for the pet trade.

Range Description: This species is endemic to the Philippines, where it has been recorded from the islands of Negros, Mindanao and Panay (Northeast and Central Range 200 to 800 m asl). It may be present on Suigao, Luzon, Samar, Palawan and the Calamianes, but the presence here needs to be confirmed. The species' distribution in very unclear owing to misidentifications between this species and Gonocephalus interruptus and G. semperi. It has been recorded between sea level and 1,200 m asl.

Congrats Arthropod -Pueblo de Panay Biodiversity, your beautiful Forest Dragon placed 3rd in the reptile category for the Best of 2015! Here is the link for the '2016 Best Wildlife Photo' mission so you can add more fantastic spottings for this year! www.projectnoah.org/missions/2004046002

Congrats Arthropod -Pueblo de Panay Biodiversity, your dining
Negros Forest Dragon has made the top 10 reptile spottings in the '2015 Best Wildlife Photo' mission! Rangers are voting on the top 10 reptile spottings, and the top 3 will be announced on February 8th. The top 3 spottings will be commented on here on the site, but make sure you keep a look out on our Facebook app page for the announcement as well! Congratulations on making the top 10! https://www.facebook.com/projectnoah

Congrats! Those are really some interesting photos. "Well done"

Thank you all for the favorite clicks and comments and for being in the SOTD.

Congratulations on the SOTD ! Glad they are within a protected area.

Congratulations! This awesome observation is our Spotting of the Day! Thanks for sharing these gems with us and we can't wait to see what you share next. Congrats again!

These are wonderful photos!

This is a great image.