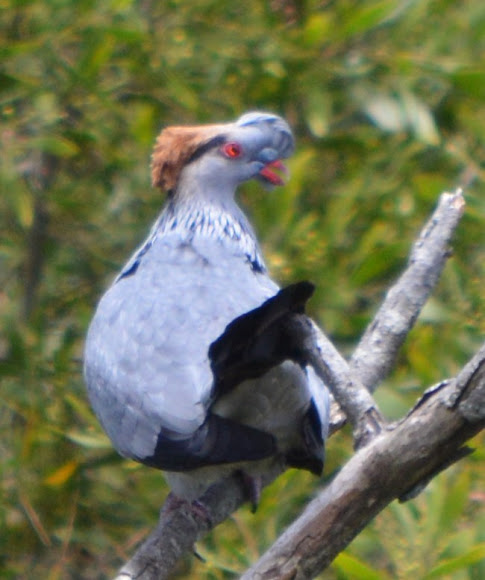 Large colourful pigeon growing to almost 50cm. Soft blue grey with red beak, red eyes and large crest of soft red brown on back of head with soft grey blue bulge of feathers at front of head. Once seen in large flocks mostly in rainforest areas, now it's a rare occasion to see just one bird. Males and females look similar. Feeds on fruit, usually finds water in tree tops as dew or collected rainwater rather than move to the ground too often. Call is a soft coo. Very timid.

Great spotting! This is a really tough bird to photograph well in the wild. You have done a great job.

Thanks SukayaDatta & yes ChrisCutter a very unusual bird, not often seen these days. This is shot at extent of my zoom so a bit blurred, lots of human noise from a group of tourists so the bird was very nervous. But an incredible sight of this large pigeon with its beautiful soft colours against a backdrop of green - it really stood out. In the quiet of the rainforest echoes a single deep coo sound as this pigeon searches the tree canopy for fruit.

What an unusual bird :)