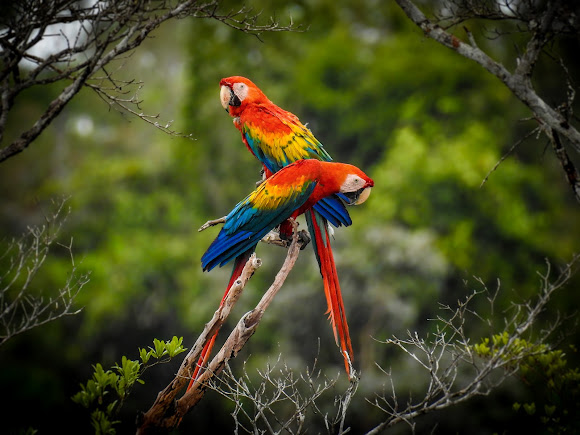 The scarlet macaw (Ara macao) is a large red, yellow, and blue South American parrot, a member of a large group of Neotropical parrots called macaws.

It is native to humid evergreen forests of tropical South America. Range extends from south-eastern Mexico to the Peruvian Amazon, Colombia, Bolivia, Venezuela and Brazil in lowlands up to 500 m (1,640 ft) (at least formerly) up to 1,000 m (3,281 ft). It has suffered from local extinction through habitat destruction and capture for the parrot trade, but locally it remains fairly common.[clarification needed] Formerly it ranged north to southern Tamaulipas. It can still be found on the island of Coiba. It is the national bird of Honduras.

It is about 81 centimetres (32 in) long, of which more than half is the pointed, graduated tail typical of all macaws, though the scarlet macaw has a larger percentage of tail than the other large macaws. The average weight is about 1 kilogram (2.2 lb). The plumage is mostly scarlet, but the rump and tail-covert feathers are light blue, the greater upper wing coverts are yellow, the upper sides of the flight feathers of the wings are dark blue as are the ends of the tail feathers, and the undersides of the wing and tail flight feathers are dark red with metallic gold iridescence. Some individuals may have green in the wings. At Fort Worth Zoo. There is bare white skin around the eye and from there to the bill. Tiny white feathers are contained on the face patch. The upper mandible is mostly pale horn in color and the lower is black. Juveniles have dark eyes; adults have light yellow eyes. It is frequently confused with the slightly larger green-winged macaw, which has more distinct red lines in the face and no yellow in the wing. Scarlet macaws make very loud, high and sometimes low-pitched, throaty squawks, squeaks and screams designed to carry many miles to call for their groups. The scarlet macaw can live up to 75 years in captivity, although a more typical lifespan is 40 to 50 years.[2]